I think I’m a Dorothy. Long before choosing among Carrie, Samantha, Miranda, and Charlotte in NYC, there were Dorothy, Sophia, Blanche, and Rose in Miami. Donning breezy, colorful, layered frocks, they reveled in cheesecake and lasagna while picturing Sicily and bemoaning/loving the men in their lives. Dorothy was tall, and I’m not, but she was a teacher, which I am. It’s either her or Sophia, who is short, so maybe that’s me, too.

Why a show about four older ladies living together in Miami would appeal to girls around 7 and 8 years old, I don’t know, but it did. Every episode of The Golden Girls, especially in syndication, played on screen in my living room. Then as a teen, I’d watch again. Now as an adult, I don’t watch as often, but there’s something about it that makes me leave it on.

Upon hearing there would be a restaurant dedicated to Blanche and The Golden Girls in NYC, S and I made it THE thing we’d do once it was open. Then it opened. And we did our thing: Project #ThankYouForBeingAFriend.

Getting there proved a comedy of travel. Amazingly, we were able to text each other when one or the other was on the subway. However, those texts were delayed, so when she was getting on one train car, I was ge

tting on another car. On a different train. On a different line. Whoopsie. Train after train, stop after stop, we told each other where we were, but by the time we’d receive the messages, we’d be in different places. We finally met up when I got out at 59th. As we waited for the next train to take uptown together, I got a sweet treat: a butter Kit Kat.

We made it to 187th and walked in the wrong direction for a while before heading in the right direction and missing it again. FYI: there’s a huge scaffolding in front of Rue La Rue. Before seeing the cafe, we saw something that seems serendipitous. I mean, come on: it’s spelled wrong, but that’s totally a sign. Sophia! Right next to Rue! It had to be a sign. Literally and figuratively (see what I did there?). 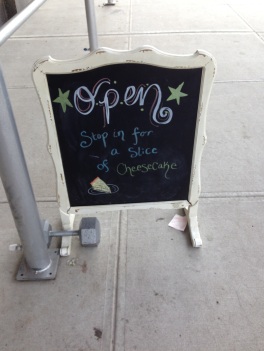 When we went inside, we realized just how small it is, but we were

fortunate that the film crew there from Inside Edition (or one of those shows) was packing up and we got their table. They’d been there to sing Happy Birthday because it would have been Rue McClanahan’s birthday, which is what this sign says beneath the window glare. We sat and then looked across the room at the ceiling to counter chalkboard menu next to the door. We’d have to go up to the counter on the other side of the room to order. It wasn’t the easiest way to choose what to eat, especially since we couldn’t find a menu online (but I did find a menu for some place in California that came up every time I looked up this place). I overheard the owner say that the menu would be changing based on Rue’s recipe book, so that  might be why they have no menus to hand out. I decided on a curry chicken sandwich and S chose grilled cheese. She went to order and I took pictures, most of them with glare, and made a friend who had been there two hours, gawking at everything. He suggested I get the Betty White Cake along with a piece of cheesecake, which is what he did. Then I took a photo of him and the owner in front of the weird bathroom door, which is the only thing in the place that’s really not Golden Girl themed and is more NYC weird themed.S 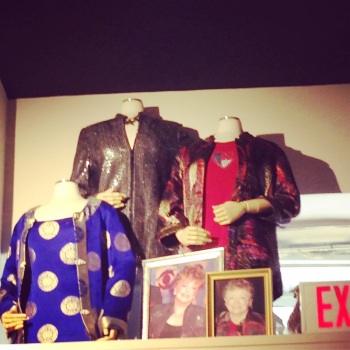 S came back with a #3, saying they’d bring the food to us. Then she checked out the weird bathroom, reporting that the butt and an arm were on the inside. That made sense. Here’s the front side:

n we waited. We watched episodes of The Golden Girls that play on a loop, commercial-free. We watched everyone getting their food and enjoying their food. We wished we had our food. We chatted some more, took more pics, S went on FB live, and then we waited more. The owner came over and chatted with us about the grilled cheese, which he’d told S at the counter when she ordered and then me right then that it had two kinds of cheeses, one expensive and one cheap, to represent each time in Rue’s life. Then he said he’d check on our food.

Then S went up to the counter about ten minutes later to check on our order. They had lost it somehow. My chicken sandwich was sitting somewhere and the grilled cheese was no where to be found, and our meal ticket had no number on it so basically we had #3 on our table for no reason. Then a few minutes later (we’d watched over an episode and a half of TGG by this point, so it was over a half hour), a runner came with my sandwich and said that he’d be right back with the grilled cheese.

He wasn’t right back. I wouldn’t eat until S got her food, but she insisted I eat, so I had a pickle. Then the guys next to us were like, You didn’t get your food yet!? One of them was like, Well, I’m concerned about it at least. Helpful in that fellowship kind of way but  not in that the-food-is-coming way. I at some chips, and S wouldn’t have any. Then she went to the counter and asked simply for biscuits and strawberry butter–her first choice–and they gave her that on the house along with #6. 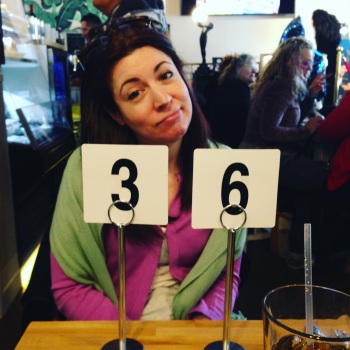 So she had two inedible numbers and I had a sandwhich. I ate. She got her biscuits! Then she ate! Then the runner came by and she said she no longer wanted the grilled cheese and he almost gasped, You want to leave!? And she was like, no, I’m just not hungry for it anymore. (Another episode of TGG has passed by at this point, so that’s over 40 minutes). He said he’d pack it for her to go, and when he came back with it and a bag, he apologized profusely, saying that since the kitchen staff couldn’t handle a sandwich, they might have to find new staff.

The problem here was that, since she’d already paid, she had to get her sandwich or they would have to give her the money back, but she had no receipt and they’d lost whatever they were supposed to have on their side. The owner couldn’t even figure out what had happened, but he did ask if one of us had ordered a tuna melt. What the?

So we didn’t get the Betty White Cake or cheesecake because who knows how long we’d have to wait for that or if they’d bring out nachos instead. We DID, however, hop on over to the Golden Girls phone. 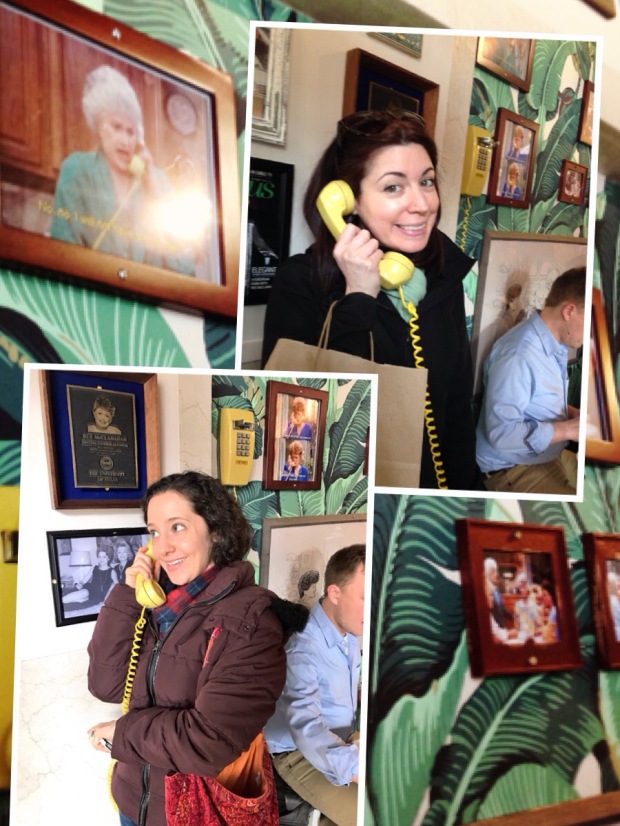 In all, the experience of being there and taking in the nostalgia was fantastic. The food service, for us, not so great. However, everyone around us got their food and had no issues.

To make up for the food debacle, we headed to Bryan Park’s Winter Village so she could get fried pickles. They didn’t have them. She decided to simply get fries, and the booth that had been open five minutes before when we first walked by was now closed. S was having an unlucky food day for sure. I felt a little guilty since I’d started off with that amazing Kit Kat and then got everything I’d ordered (very late, and it’d been sitting around, but still I got it).

We checked out a cute store across from the park and didn’t find the shirt S wanted (because, you know), but we did find some cute things: ceramic VW trays, UFO bread that’s fun because it’s called UFO, and a scratch-off poster of 100 books to read (I’ve read like 30something of them).

Project #ThankYouForBeingAFriend was mostly a success. I spent a day with my “longest” friend, and even when we’re hungry, we’re having a good time.

We took this picture 5 times until we decided this one would do.

Hey lookit—Sometimes I wear lots of clothes!
If you want honest poetry, read Patricia Smith’s Teahouse of the Almighty.
#tmw you realize your friend is a friend for life. Thanks for the stickers @bgeraghty89 !
If I can live with even a fraction of his kindness and generosity, then I will have led a good, good life.
With thanks to @banksy.expo and the ever-fulfilling streets of NYC.
Oh hello, remember me? (If not, scroll back to the summer of 2020, and you’ll get all your emotions handed to you). My meditation class this week asked me how to stop in the moment of upset, push feelings away, and how to stop negativity. The answer is: that’s not how meditation works.
Loading Comments...
%d bloggers like this: