The Friday before Easter, I was like, Hey, let me hop on a train and go into the city to see art because I feel like ending my Spring Break on a leisurely relaxing jaunt. I was even able to drive my car to the station and park instead of walking there like I did on my last (sweaty) museum adventure. I got in enough walking through the museum, though it was more like being pushed along with throngs of people than actual walking.

The Travel Zoo discount pass I had instructed me to go to the counter for entry. Easy enough. I walked into the MoMA. I had thought that there would be a lonely counter waiting for me to walk up to it for entry. I don’t know why my mind creates such ideas.

First off, there are many counters. Secondly, there are also many lines. Thirdly, there were many, many, many people. Wall to wall people. People everywhere.  I found a line for special ticketing and showed my printout and a woman told me to go ahead and get on that line, which was shorter than the others, which made me happy.

I’m pretty good with crowds. I’m used to being jostled because people don’t look down. On this line, however, I was clearly on it, standing there, taking up existence in space. The woman behind me did not seem to care about that. There was some bumping. A bit of elbowing. Some more hovering. I kept standing and breathing and telling myself I was not being annoyed. Then she hit me in the head with her museum map. This annoyed me. I turned around and looked at her. She looked at me. I turned back around, satisfied that this eye contact would solve the issue.

The map hit my head again. I turned around again and gave her my “quit it” face, which is a pretty powerful face if you ask any of my students or strangers who have annoyed me like this before. It didn’t seem to phase her. So naturally, I did the very adult thing of putting my hand on my hip and jutting out my elbow to create space, and also so that when she bumped me again, she’d get a pointy jolt. She continued to bump and hit me in the head.

This is the point when I thought to myself, I am about to get into the first fist fight of my life. And I don’t think I was joking to myself. I was literally thinking about how she was taller than I was and how I wouldn’t cause much damage. I also thought about how people don’t get into fights in museums. Then I thought that I could be arrested if I got into a fight, which is when I really stopped thinking about punching her. Yes, that’s the reason I didn’t get into a fist fight at the MoMA. And then I was called to the counter and allowed entry. She’s so lucky.

I went to the top and worked my way down, meaning I did what everyone else did, and it was crazytown. I knew I was done looking at a piece of art when the people around me were also done because we all moved together, being pushed and pushing each other from room to room. This was a different kind of pushing from the waiting-in-line pushing. This was more like a flow of artistic mesmerization.

The non-permanent exhibitions were Nan Goldin: The Ballad of Sexual Dependency. That exhibit came with a warning before walking in that not everything there was suitable for all ages. The first thing I saw was a photo of a penis, so, agreed. Unless you’re European. This one does not have a visible unit.

The Hug, New York City, 1980 — this reminded me of a Vettriano painting.

Nearby was Teiji Furuhashi’s Lovers: a dark room with a motion-sensor projector in the middle that projected silhouettes of naked men wandering from and to nowhere.

In non-nakedness, there was How Should We Live?, an exhibition that felt like a fancy showroom in IKEA. This is not an insult.

Dust Gathering was another, though I didn’t really know what it was about other than there was a helicopter floating from the ceiling.

Paul Chan: The Body Of Oh Marys — because anything with writing on it draws my attention

Barnett Newman: Vir Heroicus Sublimis — because I think it’s pretty neat that someone can paint the same color across a canvas that size evenly 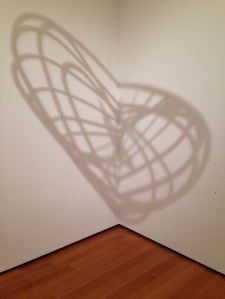 This isn’t the artwork, but I loved it. It’s a shadow of Aleksandr Rodchenko’s Spatial Construction #12. 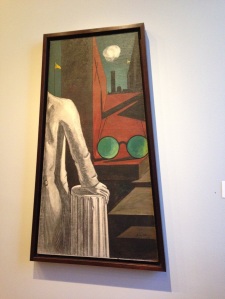 Giorgio de Chirico’s The Serenity of the Scholar — because I’m a scholar, right?

I don’t know what this was. I was amusing myself because of the reflection. 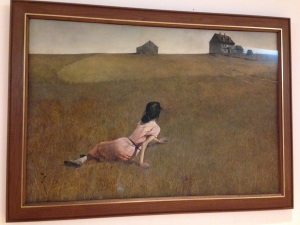 This is Andrew Wyeth’s Christina’s World. I’ve always loved this painting for obvious reasons until I actually read what it was about–this lady has polio and is movement impaired. It’s less whimsy, more tragic.

At one turn, there was a huge mob, bigger than the other normal mobbing from room to room. Then I realized why. 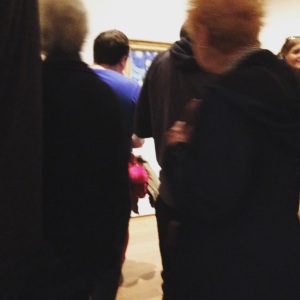 This is Starry Night.

Oh, I also got admonished by a security guard who asked me to step back from a Dali painting. Heh heh. Where was he when I almost decked that woman on line?

I stood in the sun for a while when I got back down to the ground floor.

Then I decided that the museum itself was art. 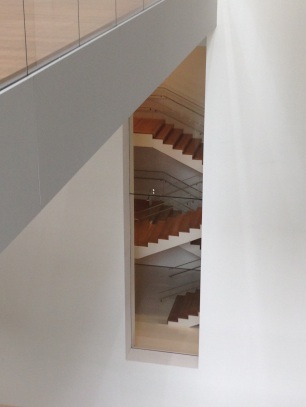 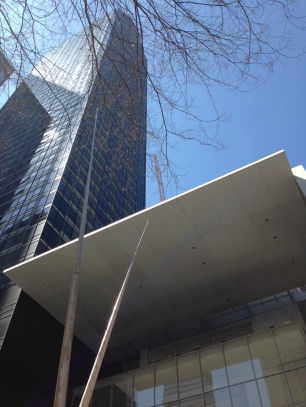 I headed home just in time to miss the non-running-train catastrophe at Penn Station, which meant I got to have a leisurely train ride home with a seat all to myself.