Fact: Drinking from the Fountain of Youth makes you stay young. Here, “Fact,” means myth. You can believe in myths, especially ones that keep you young. After making friends at the Old Jail, Eddie and I made our way to the Fountain of Youth, where we made some bird friends. One peacock was not very friendly; it was attacking its own reflection on the side of a mini-van. The other peacocks seemed unperturbed, simply living the sweet life. Hooray for more birds. We met either de Aviles or Ponce de Leon at the entrance. They are both important people and neither of them has the first name Ponce. See? I learned something. 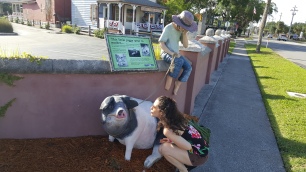 My reaction when peacocks attack

The first stop after entering is the Fountain of Youth. You see, there are a lot of other things to do at the park, which we discovered after going inside. It’s not only water that makes you young, but it’s also lots of old stuff because that’s what St. Augustine is, a history lesson. 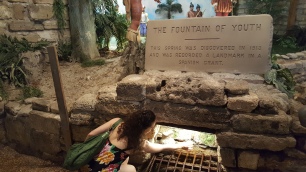 Then we met Tina Jones.

I’m assuming you can figure out the backstory on this one.

We then ventured through the original Old Mission (before the guy dressed as a monk got there, so we were pleased we didn’t need to interact), the watchtower, the cannon (we watched them shoot some arrows and then fire the cannon, so it’s safe to say we’ve had our fair share of cannon fire), some Temucua village huts, and the demonstration of fire arms that started out with an accidental flash in the pan (the guy was apologetic, but I was happy it happened because we learned why and that’s what this trip was about–learning and history). You can see how happy we are learning in the loft of the mission. 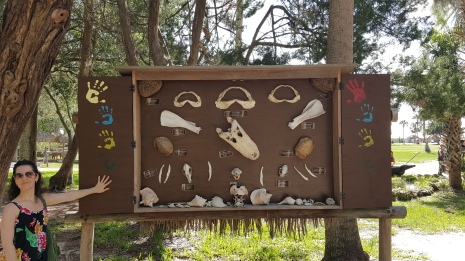 In our defense, we’d climbed the lighthouse the day before. My calves were on fire with every step, especially down stairs. Also, we clearly love learning.

We also walked out onto the explorers’ landing. The views from the end are really pretty. Fact: a chalupa is a boat. We have no idea what the thingies coming up from the mud are. I guessed some sort of clam or mussel, but they didn’t smell, so I could be very wrong. We also saw an egret / heron / ibis. Despite our time in the bird swamp, I still can’t tell the difference. I do know a cross when I see one, however. 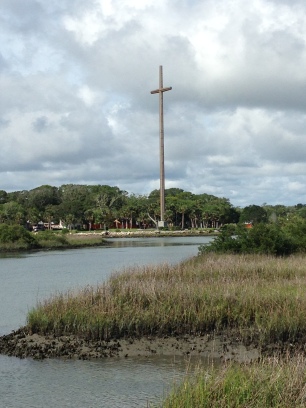 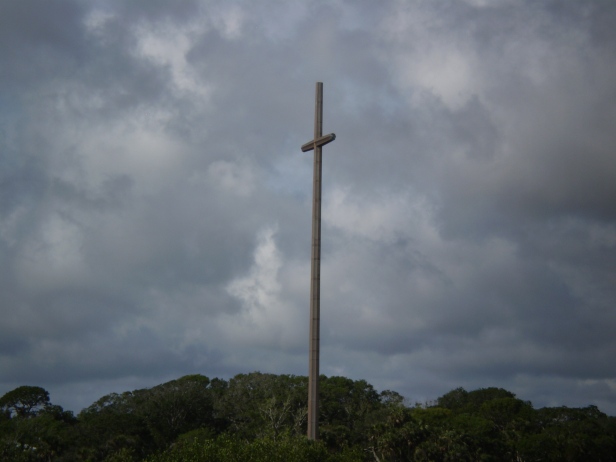 We sat through a presentation that boasted a gigantic globe. The globe was gigantic. Very cool. The presentation was really terrible. The voice over guy boomed without making sense and following the lights on the globe proved to be confusing at best. It lasted only 13 minutes. Like every presentation there lasts about 13 minutes. We didn’t sit through another one. We had more places to go to learn about old things.

Before leaving, we found this but decided against feeding anything other than ourselves.

We walked across the street to the Fountain of Juice. It’s a real thing. We had to go because it’s the smartest name for a place in the world. Eddie got a lemonade that was so tart he could drink only a third of it. I got a fruit smoothie with berries but mostly it tasted like apple, which was still delicious.

Onward to old things! We found the Oldest House that is, I think, more than one old house. It’s like houses and one is the oldest and one is the second oldest. It had a cool door. We didn’t go inside. Fact: Five Flags have flown over Florida: the old Spanish flag with the red X, France, the new Spanish flag, colonial US, and modern US. I know that from memory. 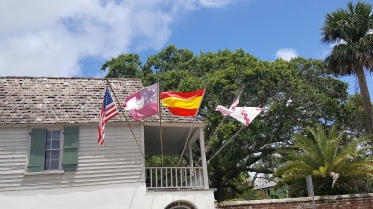 We then took a glance at the water and visited a goat.

Time for mini-golf. We pulled up to Fiesta Falls to find waterfalls and a ship. Then while playing, we realized we got to go on the ship and through the falls! One of the best mini-golf places we’ve been to! It was incredibly dreadfully hot, so he got ice cream and I got a lemon-lime slushy when we finished. He beat me, but not by much AND I got a hole in one.

Then we went to the beach. Like for under five minutes. We’re probably the only people who go to Florida and don’t bring bathing suits. I mean, the beach is nice but who has time to lay out in the sun with all this learning going on? The sand felt like silk.

And then we went to see Wonder Woman.