Three movies in four weeks. That’s starting to go in the right direction. I used to go to the movies a whole lot. Then came along higher ticket prices, reserved seating, and big chairs that I don’t fit into comfortably because they’re made for people with longer torsos. Gripes aside, I really like going to the movies. I like going during the day. I like going to 9 AM showings on Sundays.

Somehow, I’m on a list for GoFoBo or something like that. I get emails every once in a while offering free tickets to previews. When I say “every once in a while,” I’m talking years apart. Out of nowhere, I got an email to go see Book Club showing right by work. I’d never even heard of it, but since it was free, I was in. SD came along. She’d  heard of it. She was like, Isn’t that the one with… and I was like, That’s already more information than I know.

Usually, I don’t see comedies in the movies. I also don’t usually see movies about older ladies reading books. I need to change my watching ways! This was so much fun! The theatre was filled with people laughing out loud the whole time. The movie really was funny. There were some definite plot holes. Huge gaping holes (like why can’t one of the women still be in the book club if she moves away when she already flew back to participate once before…it made no sense). To make up for the holes, there was Don Johnson. I haven’t thought about Don Johnson in I don’t even know how many years, but this made me happy.

During the last week of the semester, the officemates and I treated ourselves to Avengers: Infinity Wars. In addition to free tickets, I had an offer for a free large popcorn and a free soda. I got very excited at the soda machine, seeing they had flavored ginger ale. I got a bit discouraged when I couldn’t figure out how to work the soda machine–I really don’t drink soda apparently–or go out in public apparently. But I got it to work and then tried the lime ginger ale that came out basically like lime soda so I dumped it and had some regular ginger ale that tasted more like sugar ale. I didn’t finish it because it was a large and a large is about the side of a two litre bottle of soda. The popcorn was the size of a small suit case so we shared in small cups. The movie required concentration because the cast was the population of a small country, which we knew going in. Coming out, we were a bit depressed with all the fading away of half that population. However, we rallied ourselves with real life facts–the fact that not all these characters can simply fade away for good because then the movie franchises would take a serious hit, and no one is throwing away that kind of money.

My gift to my mom for Mother’s Day came in the form of the re-release of 2001: A Space Odyssey on original 70mm to celebrate its 50th anniversary. Into the city we went, lots of trains, lots of walking, and then lots of stairs to climb down and up and up and down. Worth every step to be in one of those old-timey theatres that has enough updates to not be gross but still keep the feel of a retro theatre where I fit in the seat and I don’t have the anxiety of choosing my seat beforehand. 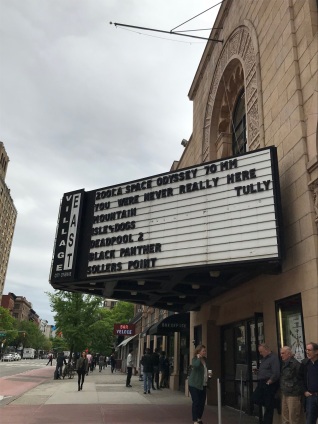 The movie had an intermission. I’m guessing because of changing reels. This is the extent of my 70mm movie knowledge. The movie ended with someone in the audience asking, That’s it?

But that’s not it! There’s a sequel! I proposed to my mom that maybe we remembered more about the sequel because it appeared more recently, in the 80s. She didn’t remember there was a sequel, so I tried to explain it. Have you ever tried to explain the plot of a movie you barely remember and never understood? Yeah, that’s exactly what I did, so we decided we’d have to watch it some day. Maybe when they bring it back into theatres for its own anniversary. And that will be full of stars. Maybe.

PS I took myself to see Deadpool 2 today. Stayed for all the credits like a good gal should.

2 thoughts on “Mega Return To The Movies”