My brother took me to my first Brooklyn Cyclones game and it was Seinfeld night, so my brother wins Best Sibling Of The Year.

Also, we drove from Long Island to Coney Island on the Belt Parkway in 40-something minutes. I know, guys, I know. We won the Traveling The Belt Parkway Award, too.

Also, we got there so early that the gates weren’t open yet and there were lines. We got a Keith Hernandez Cyclones alarm clock. Across the face is Keith Hernandez’s face with Nice Game Pretty Boy written under it. They were already selling on Ebay before the game started.

When we got to our seats, we listened to the episodes of Seinfeld they were playing over the loud speakers. We laughed out loud a lot. Also laughable–the team was called the Seinclones for the evening.

The festivities included some of the usual games like the hot dog race (Relish won) and throwing a bean bag through the hole in a cardboard sign that said Dime. These I know are usual games because this is the kind of thing that happens at a lot of minor league games. I wish all baseball games were like this. 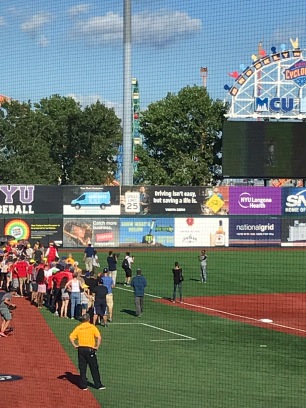 In addition, we witnessed some of the greatest Seinfeld-themed games like The .5K Inagural Mr. Bellavaqua Run. The games had the greatest names and I can’t remember them all, but the rest included: Mr. Pitt’s eating Snickers with a knife and fork contest; eating eclairs out of garbage pails; throwing golf balls into an inflatable whale’s blow hole; flip cup with Ovaltine; running the bases on a toy horse while scarfing down beefarino.

After the game was over, one more contest unfolded. It’s the one I would  have been in had I known how to enter and now I know for next year so I have to go again. It’s the Elaine Dancing Contest. About 8 women walked out onto the field and let their little kicks go.

Three of them were wearing the early-Elaine attire of long flowery frocks and glasses. One of those women also had the Elaine-bag and Elaine-hair. Her get up was impressive. I did make a comment to my brother, though, that Elaine wore a black outfit when she danced. Sure enough, she came on the screen in the outfit I described as they played the clip. Still, the flowery frocks were amusing.

The woman who went from head to toe Elaine also danced the Elaine dance with sheer abandon. Several of them did, throwing their heads back and kicking and flicking around. The woman with the Elaine-everything won. When the emcee handed her the trophy, she didn’t take it. Instead, she shoved him–Get Out!

As far as baseball games go, I’d say this is surely my top experience by far. Next year, I wear black and offer some little kicks of my own.