When I hear lanterns, I think of nighttime in the Old West and a barn fire from a horse kicking over a kerosene lantern and then an old man in a nightgown grabbing his own lantern and running onto the porch and his eyes going wide at the blaze and then cowboys and lanterns and fire.

Also, I think of Chinese lanterns. Those are pretty!

Winter Lantern Festival sounds like the pretty kind. Over in Snug Harbor on Staten Island, lanterns were ablaze! Except that they weren’t kerosene fueled and weren’t really lanterns. S and I headed out on a not-too-cold winter night to see the lanterns which turned out to be lights, and the lights were pretty, so it all worked out.

Snug Harbor is pretty small compared to the number of people who were swarming to see the pretty lanterns. That meant a lot of driving in circles. When I was about to make a fifth loop, the security guy beckoned my car over and asked why we were there. S was like, To see the lights. He was like, Okay there’s no parking inside but you can park right in front of my car. He indicated a very tight spot for which I would need to parallel park. And it took me under five minutes, which is highly impressive. I also sweat out maybe a pint of parking sweats, which is expected. (If y’all thought there would be no sweating, y’all have forgotten key elements of my soul).

Not pretty was the soft mud beneath our feet as we walked through. We wore boots. We were smart. I’m including this link here– https://gothamtogo.com/winter-lantern-festival-2018-on-staten-island/ — to show how the photo envisions the ground as magic unmuddy tiles, which is the opposite of what we were walking on. There were paths made of some sort of outdoor pathway building materials, but to get closer to some of the displays, there was lots of mud in the dark. But it was lit by these pretty non-lantern lights, so, in turn, it was kind of pretty, too!

The lights were LED sculptures and Eastern themed. There were large flowers, a panda, and a dragon at the beginning. The Chinese zodiac lit up another pathway. There was a shimmery peacock, which I suppose is not necessarily Chinese, but more worldly. Other worldly things were the Christmas tree and some butterflies. And we walked through a shark. It’s hard to explain, but it was also pretty. 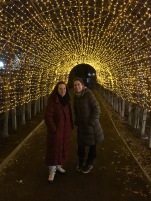 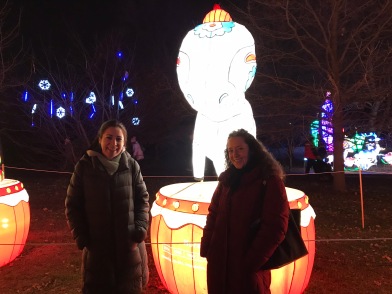 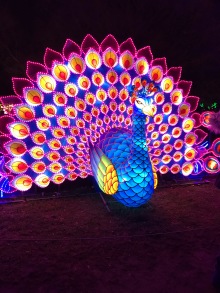 A small section of candy appeared, and we saw it from across the way. I was like, That was made for you. S was like, for sure. When we got to it, she kept turning towards me as I was taking pictures of her from behind, and finally I was like, Hey you’re ruining it! And she was like, Ohhh, yes, good idea.

A few years back, we went to a Will Cotton exhibit and I snapped a quick photo of her from behind looking at the painting, and it was pretty amazing. Since then, whenever we come across a candy-themed exhibit, I usually recreate the magic of S In Awe Of Sweets. Here in the dark backlit by candy, it does the trick. 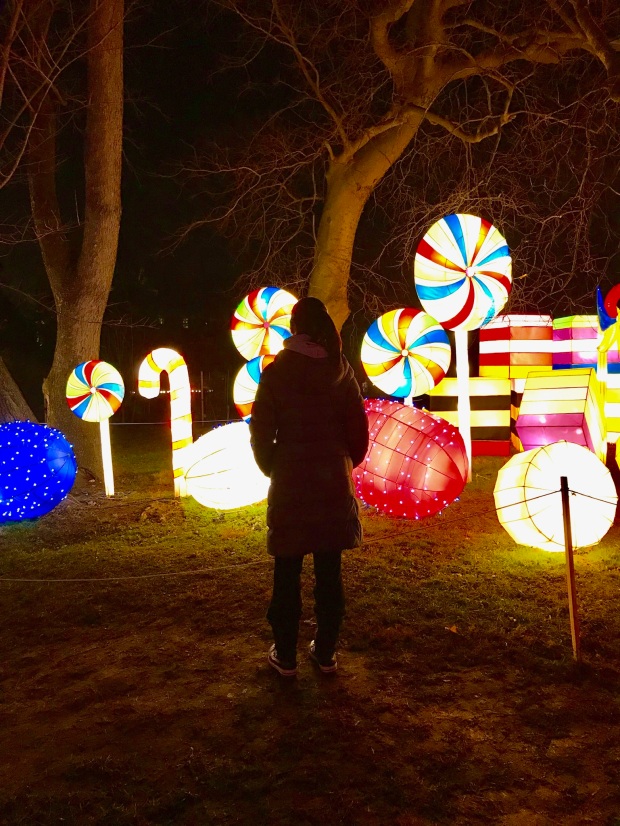 Then there was another panda. Like a person in a costume panda. I stopped short and then told S we had to walk quickly. When she saw what I was avoiding, she cackled and then tried to get me to go back twice to take a picture. No, no thank you. I am not going near adults in costumes that don’t speak. It’s weird and awkward and I stand by my choice.

She also found some lanterns for me! Lantern success!

Look At All Of These LANTERNS!!!

After we were lanterned out, we headed to the car. Only we couldn’t find the car because once we were out of the exit, I was like, We’ve never been on this street before. S asked a security guy about exits, and he was like, Did you park on Blah De Blah? And I was like, I have no idea. So he was like, That means you did. He gave us directions back into the park and then out again. I had to parallel out of the space halfway because by the time I’d maneuvered back and forth a bunch of times, the other security guy pulled his car away. More success! Very little sweating!

And all by the light of the pretty lanterns.