The plan was a fun one. S bought us tix to a limited-time pop-up museum down on Bleecker that was all about the zodiac. We are Virgos, truly, and the pics on Insta looked like a good time.

Then S got sick, so I was faced with possibly going to a pop-up by myself. Boooo. The whole point of a pop-up exhibit is to go with someone to see fun installations and maybe roll around in a ball pit and then make fun of each other when you get stuck. If you don’t know what I’m talking about, check out Candytopia and The Color Factory. You may notice a trend that my fellow Virgo is my main pop-up go-to.

Luckily, the only other person I know who has a focus group side hustle was willing to go with me because we were going to already be in NYC for a focus group.

Side note: If you didn’t know it, I’ve got a focus group side hustle. I go to focus groups where people ask me my opinion on things and I answer and they give me money. Yeah, I’m an influencer.

Side note: I know only one other person in the world who does this. I mean, clearly, there’s a realm of people who do, but DB is the first person I’ve met outside of a focus group who does it, too.

Anyway, so after focus grouping for over two hours about buying a lot of points to travel the world and being in debt for eternity, we walked down to Bleecker from the 40s because it was one of those sunny city days that had a breeze and didn’t get you sweaty until you stopped walking. If you think I was going to say one of those days when you don’t sweat, then you don’t know me at all. Shame on you. 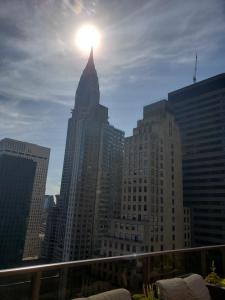 You can stay here for a zillion points that cost five trillion dollars.

We found the doorway to the zodiac thingie because there was a pink neon piece of paper with an arrow markered on it that said This Way To The Zodiac. Hmm, okay, helpful, but also, construction paper? Interesting start.

On the plus side, we were greeted immediately, asked our signs, and given glow-in-the-dark bracelets. Also, we got stickers! One each. I got a whale. He got a dolphin. We were encouraged to stick them on the wall of the second room and write a message. Fantastic!

Also a plus, the Pisces room caused some dizziness but it was worth it. There was a clear blow-up cushion thingie that I sat on for a while. On the floor was the Pisces sign made out of seashells which I thought wasn’t the greatest idea since seashells and shoes don’t make good friends. We didn’t step on them.

I think Leo was the jungle room. This room had great lighting and a bamboo chair that made me think of that time I was in McLean, Virginia, and I played that safari-themed mini-golf where a gorilla jumped out at me when I sat in a jungle chair like this one. Luckily, the budget clearly didn’t allow for things to jump out at me, so this experience was less scary. It made for some uber boss photos. 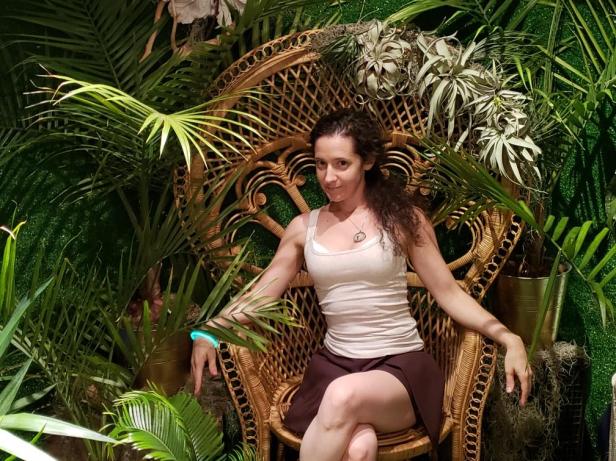 Then there was the Virgo room. It was purpled-black-light. You know those long lunch tables you see in school cafeterias? Yeah, so, there was one of those in there. Across the small room was a purple chair shaped like a hand. Then there was the word Virgo taped to the wall. And a lot of empty space. A lot of cellophane. A lot of hmmm that’s an interesting interpretation of a zodiac sign. And then more cellophane. 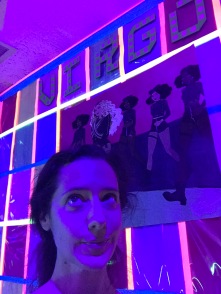 The most confusing rooms were towards the end. One was a white room that had a small white te-pee-like tent with a white shag rug and pillows in it. Next to the tent was a pail of soaps that were were free to take. I was like, You wanna go in? DB was like, Not particularly–do you think people have had sex in there? Hmm, possibly. There was a little sign that requested you take your shoes off before going in, so maybe people hadn’t stopped at their shoes. The other super confusing room had standing silhouettes of men holding cameras. They were wrapped in red boas. Yeah, I don’t know.

Not to disappoint, one of the rooms had a ball pit. It was a sad little ball pit that I didn’t crawl into. That room also had cellophane walls. There was a cool take-off of a cereal box as artwork, though, so instead of crawling into the germ pit, I oohed and aahed at the artwork. When we went into the next room which was fire red and tiny, whoever was behind us had wandered into the ball pit and balls were rolling into the room we were in. We spent only a little time there as to avoid possible ball pit bacteria following us around. Also, I’m not sure how Capricorns, cereal, and ball pits are related.

Side note: When I crawled through the marshmallow pit at Candytopia, we were there practically on opening day, so that meant less of a germfest. As for The Color Factory, well, I loved that place so much that I willed away any possibility of catching typhus. 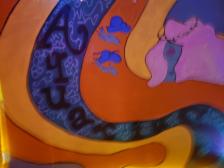 The pop-up was put together in under a week. It was up for five days. It supported local artists. The concept was fabulous. The execution reminded me of when I was in high school and each grade competed against each other for best decorated hallway. Aside from that, however, it was an experience that I’ll never have again, and I’m so grateful that S was willing to go and gave me an early birthday gift and that DB was willing to step in and didn’t ditch out once we started going through and saw all the cellophane and he even indulged me when I saw David’s Tea next door and bolted in to grab some.

So really, all this adds up to is:

it’s Virgo season and my birthday is soon. Yeay!