The Long Island Heart Walk took us to the boardwalk at Jones Beach. This was super special since that’s where my brother used to take my dad for beach days. We arrived geared up for a Fall walk, and it turned out to be more like summer. First we checked out the shoreline. Such a pretty day for a walk. After walking around from booth to booth trying to win things (I won a hat! He one a keychain! Thanks, Chase Bank!), we walked over to the start line and waited. Then we waited some more. Then we followed suit with a slew of other walkers and unceremoniously began the walk before anyone cut the ribbon. We went around it, not through it, because we’re not dicks.

We pretty much started at the beginning of the boardwalk and walked under overpasses and to the far end. Does it surprise anyone that I was sweating profusely? No? Good. Because that’s exactly what I was doing. My brother was explaining why there was no breeze whenever I pointed out that there was no breeze. What neither of us could explain was why there was a prop plane flying a banner over the water, advertising the Heart Walk. I’m hoping it was a volunteer plane because that’s not why I’m raising money. There’s no need to fly a banner over where the people who already know about the walk are walking. (This is the same issue I have with charities sending me stuff in the mail asking for money after I’ve already given them money. Online. Stop killing trees and wasting postage on the money I’m raising for you please).

We came up to a point in the path where the boardwalk was kind of no longer a boardwalk. We saw people hiking up into the brush over a small hill around a turn where the path became unseeable unless you took the turn with them. We both realized at that point that we’d been walking for quite some time. The walk should have been three miles. We were already at two, which meant that we’d get another two walking back.

It’s at that point we decided to turn back, seeing that no one from the Heart Association was anywhere along the path to tell us when to turn around. I suppose they thought no one would go up into the brush. However, reaching the brush was still farther than necessary.

The silver lining here was the beautiful walk along the boardwalk. You just can’t beat Long Island beaches. 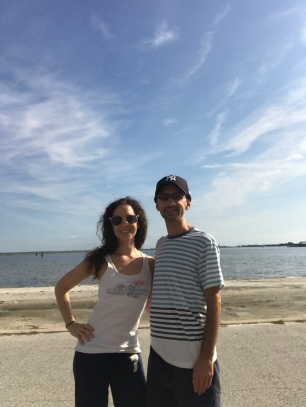 Two weeks later, Team Joe Rau was in Queens for The Walk To End ALZ in support of the Alzheimer’s Association. We arrived and found parking because of the very uninterested volunteers pointing casually in the direction of parking lots. On the plus side, we found parking! On the negative side, the parking lot smelled like pee! We hurried away from there and on over to the grassy area to sign in.

We got bracelets, the kind that stick to the hair on your arms, and then got flowers to carry in honor of our dad and others. We got free snacks because that’s how the ALZ Association rolls–cereal bars and bananas all day, yo. We also took pictures in the photo booth.

We signed a memory wall. We checked out the giveaways and got free bags. Because I need another bag to put into one of my three large and overflowing bags of bags in my coat closet. My brother picked up some catalogs about Flushing. Then we went back to the pee parking lot to put our now filled bags in the car.

Back to the start line. There was a lot of storytelling and explaining about why we were there. The sun was out, shining and hot. I was ready to go. They were not as they talked more. Then we held up our flowers, and that made the waiting worth it. Everyone had flowers spinning in the wind, and it was so pretty. Then there was more talking until finally they cut the ribbon and off we went!

My brother and I aren’t speed walkers as a profession, but we could probably win an Olympic walking event. We caught up to the front pretty quickly. Leading us on the walk was a cheerleading squad. I appreciate pep, for sure! However, when you cheer about Alzheimer’s, even when it’s against ALZ, it still sounds wrong.  Intention? Fantastic! Outcome? No thank you stop cheering about Alzheimer’s please.

We walked by the World’s Fair building and then around it, seeing it from an angle we’d never seen it before. Then we came upon the Unisphere. Yup, this walk was also pretty breathtaking. Everyone stopped to take pictures. The cheer squad climbed into a pyramid for photos. That’s when we made our move and lost them and headed to the front of the pack. We were not the first to finish, but we were some of the first. That’s when I took the worst finish line picture in the history of finish line photos. Then we got more snacks because the ALZ Association understands the power of food as appreciation. I got an apple. He got a bag of kettle potato chips. All was right with the world. When we got back to my brother’s place, we planted our flowers in his garden. 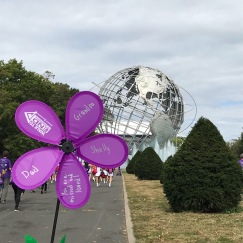 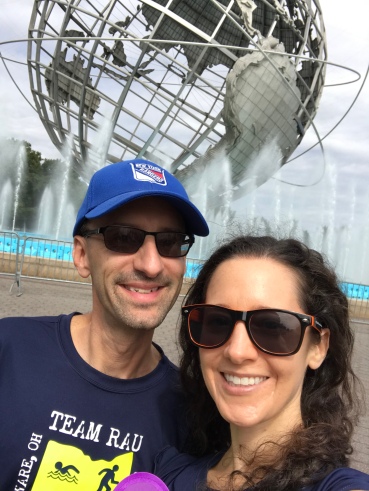 Because we have awesomely generous people in our lives, we raised:

If you are a generous person who missed our walks, you can still donate:

Serendipity has me featuring at a poetry reading at Sip This on October 15, which is my dad’s birthday. So while we’re not walking, Team Joe Rau will be on hand to collect donations for the Wounded Warrior Project. That’s an in-person donation collection, but feel free to donate online if you can’t make the reading and still want to donate.

Also at that reading? Some fun Elvis trivia and, of course, giveaways!

Then Team Joe Rau is pretty much done for the season. We’ll see you next Autumn. Or sooner if another charity walk finds its way to our sneakers.