Halloween is fine. I’m not big on dressing up, but I will if asked. A few years in a row, I’ve worn my Batman t-shirt to work. This year is the first year any of my students acknowledged it. Someone asked, “Is Batman your favorite?” I was like, “Yes.” Good talk!

This year, I had plans! DB asked if I wanted to go to a crypt in a cathedral. I was like, Why is that even a question? Of course, I want to see a crypt! Remember the catacombs? I like dark places under holy buildings. Totally my jam. Like, holy jam.

The weather decided to be Halloweenish all day–windy with a chance of trees falling on me, so I remained appropriately terrified all day (S texted me to ask if I had PTSD, and I was like, yes, yes I do).

Anyway, the wind remained whipping well into the darkness when DB and I went to the cathedral. At the threshold, a woman greeted us and handed us each a bag. I thanked her and then said to DB, We can go home now because my night has already been made. A bag! I didn’t even know was in it! I was thrilled to simply have them give me a bag. 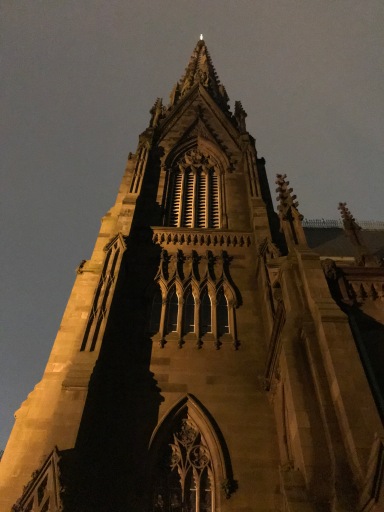 Then we checked in and the woman said to us, “Now you’ve been checked in; let’s see if you’ll be checking out.” Ah, ok. So it’s going to be that kind of night.

We sat towards the back of the church waiting for the group ahead of us to finish. Then we moved to the front where there was a screen and a handful of people clad in black roaming around, guiding people to seats in the dark. We then watched a film that was supposed to look old-timey. It was the story of a guy, Something Stewart, who basically owned Garden City. Then he died. Then his grave was robbed. Then eventually the widow tracked down his remains and had this cathedral built as a huge gravestone for him. She hid his remains so they couldn’t get stolen again. The end.

Then some guy basically pounced out from behind the screen to greet us, asking if we’d heard the bells tolling. Now I kind of expected that to happen because I’d heard a shout from the group ahead of us. The women in front of us, however, did not expect anything scary to happen, so they jumped, completely startled. Then one of them proceeded to take at least five of the same picture of everything we passed, so that slowed down our progress towards the crypt.

We were guided by another man who carried a lantern. We found the spiral staircase, and the three women freaked out about that. I don’t know if the stairs or the spiral was scary for them, but they were terrified. The staircase was really narrow and it was hard to see, but it was still kinda neat. Not as terrifying as, say, a gigantic tree falling down on  you. (That’s now my measurement of terror: tree tragedy). 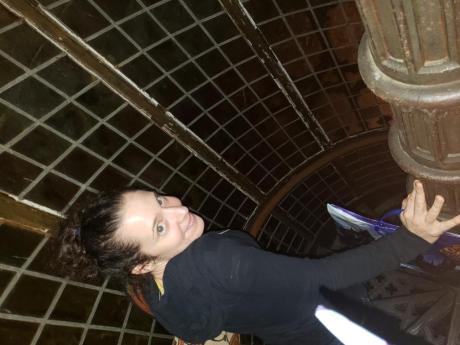 This is the face of fear.

At the bottom of the staircase was reason to be freaked out. A woman was sitting in a corner, wearing a black veil, praying loudly. There was smoke pumping in from the hallway. Now things were getting weird. The three women also freaked out more when the smoke machine made noise.

Next we met a statue of Mr. Stewart’s widow. It was surrounded by candles. We heard more about her efforts to find him. Then the guide was like, Oh, look, it seems like his funeral is about to start.

We walked to the other side of the room where there were mourners and chairs. DB and I sat in a back row and noticed the body in the coffin was totally a real person. We were like, he’s totally going to move. The guide narrated more but it was hard to hear because the widow with the black veil sat in the front row and started wailing, and the guy comforting her kept making snide remarks about the dead guy, which was really funny. Then, sure enough, that dead body moved. And sure enough, the three women somehow didn’t see that coming and shouted in terror. This? Was entertaining. 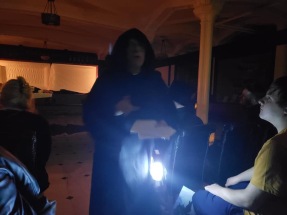 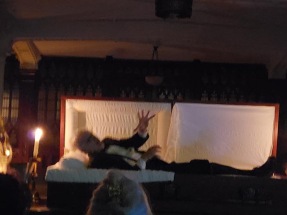 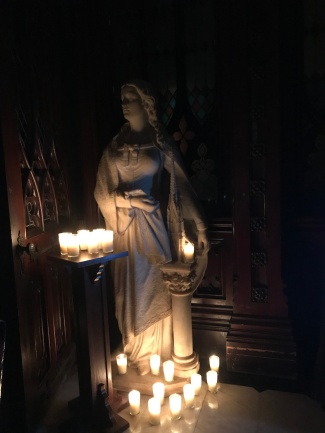 We then moved toward the hallway again, hearing more about grave robbers. As we entered the hall, we were greeted with two grave robbers trying to seem like they weren’t robbing a grave–which was super funny–and enough smoke to make your lungs simply stop working. Before that happened, we were ushered into a crypt where there was more smoke but I’m pretty sure it was real smoke because we were lighting candles.

This was nice. It was an interesting way to forget the spooky for a moment and light a candle for someone. My candle wouldn’t light. DB lit my match twice because that wouldn’t light at first, and then I tried five candles before getting one to catch. Then we stepped back to take in the glow. It was heavenly, which makes sense because we were in a cathedral. 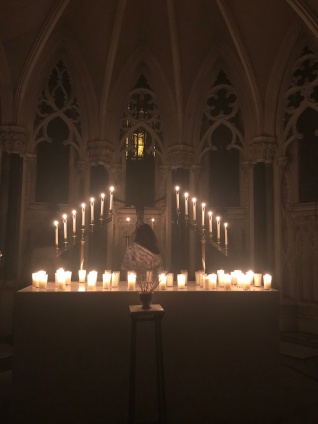 That woman who was scared and took a billion photos? Yep, that’s her. And now I look like the psychopath for snapping this.

On the way out, there was a basket of candy! This is how every mass should end! We took some pieces and put them into our bags. Then we found our way out by climbing up the creepy stairs outside. There was smoke drifting about as we ascended, and the wind was still whipping around. It was still Halloween and still super eerie and we still don’t know where this guy’s remains remain. However, I do know where all the candy went. Plus, there was more candy in our bags along with some pamphlets about the cathedral. Really, the contents of the bag weren’t as exciting as the act of getting the bag itself. 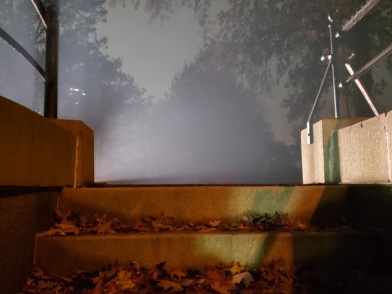 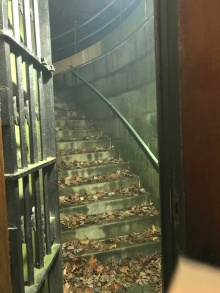 So to recap, Halloween was awesome because:

Last time I was here a few months ago, I was 15 pounds lighter and full of spirit. I’ve scolded a few pairs of pants, some skirts, and several shorts for fitting more snugly, and I’ve been frustrated at losing some of my spark. Also, I recognize that I’m healthy, and my life is brilliant. I’m thankful for park walks and sunshine and friendships and for being able to move forwards.
What’s the word that’s kind of like eerie but also means terrifying in the way that Severance predicted the end of days that began with needing to wear N95s? This pre2020 novel by Ling Ma also explores how we share information, the inside scoop of book making, what city living is, and the impact of our memories.
Getting a little judgey every now and then can be good for judges and judgees alike. Reading I’m Judging You by Luvvie Ajayi Jones is good in the same way; it allows us to pause and really think about how we act and how we treat each other. Also, she makes up words, and I’m all for that.
I teach good sometimes.
Thanks to St. John’s Humanities Review for sharing three of my #poems in their Crashing The Canon issue.
Last summer, I went to an outdoor artsy festival at a brewery. That was my first encounter with @colored.colors . Almost a year later, I’ve read #poetry a bunch of times for #PoetsMeetMusicians at @lithologybrewing , I’ve spoken on a panel at @fireislandvines , I’ve had my poetry appear on an exclusive beer can, and now I host Sunday Funday Book Club at @hopsscotchny . The wonderfully creative people I’ve met along the way have inspired me and brought me so much joy. I hope I do the same for them. Incredibly grateful for #coloredcolors, my #creativecommunity, #longislandpoets, #longislandwriters, and the venues who continue to support us all.
Loading Comments...
%d bloggers like this: