This is a story of triumph. A story of perseverance and victory. Might I say, a story of pure bliss. And friendship, of course.

Not too long ago, S, R, and I visited the Friends apartments when they popped up on Mercer. We got our fill of wah-pah and pivoting. This was a moment between trivia jaunts.

We’ve been to Friends Trivia before. S has been to more than I have. Together, we tried our hand at Big Daddy’s trivia night. We also gave it a go at Sip This. Once there was one at a bar somewhere. We have placed, but we have not won. S carries the team. I have my expertise in Mockolate, one episode in a vast nine years of a series. I know my place–moral support.

When the chance at Friends trivia rolled around again, it was iffy because of schedules. The day before, we were like, okay let’s go. I grabbed tix online. Tickets came with a drink, so I could get my green tea on while trivia-ing.

I then thrust myself into study mode. I’ve developed a surefire way to look like a psychopath whenever trivia comes up about something I’m not very in-the-know about. I go online and write down things that could possibly be answers to other things. Which is everything.

The last time I did something like this, it was for Harry Potter Trivia at Sip This with SD. I chose to focus on important numbers. This strategy did not lead to victory. However, it did lead to me being the only person who knew Ginny Weasley’s jersey number. I told SD, just write down X because that number seems to come up a lot. And I? Was right! Heck if I know it now because this kind of cramming leads to remembering things only the night of.

So I wrote down things about each friend–relationships, how many episodes have their names in the title, nicknames, travel, apartment numbers, allergies, catchphrases. Looking back over the notes, some of it is illegible. I legit have no idea what I wrote. It could be Friends facts. It could be a recipe for stew. I do know the recipe for Rachel’s trifle. Or at least I did. During the trivia. 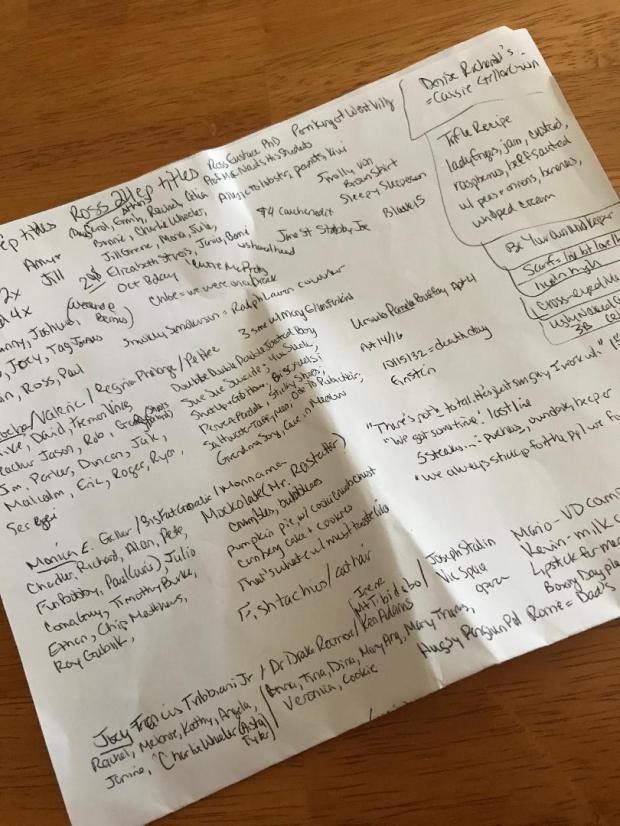 Jam-packed with newfound knowledge and having watched two random episodes from Season 1, S and I met up at Ground Central, grabbed our drinks, and grabbed our seats. There would be five rounds. We would be the Chanberries. We were set.

Round 1’s first question was Who are all six friends?

I proudly wrote all six friends’ names without the help of S. Who’s carrying whom????

S looked at what I wrote and said, Stop it! You wrote Ross twice and forgot Monica.

Again, I know my place in this. I crossed out the second Ross and wrote Monica.

The rest of Round 1 I knew pretty well, too. This was encouraging.

Then came the between the rounds nerve-wracking activity of the lightning round. If your team scored the lowest in a round, one of the two of you had to answer three questions in 30 seconds to stay in the game. You weren’t allowed to pass, either. S and I were like, well we don’t want to do that, so we have to not lose a round. Anyone who had to do a lightning round lost and was out of trivia, which made me kinda sad because then they couldn’t keep enjoying the game. I like games! I want people to have fun!

Round 2 went okay, too. I knew some of the answers and others I had no clue. S knew everything. Everything! And then Round 3 and Round 4, too. By Round 5, I was like, this is going super well. She was like, you wrote down Yemen. Yes, yes, I had, and that was an answer. See? The studying of random things helps.  Other things I helped with : Gladys is the name of Phoebe’s artwork; Amy and Jill are Rachel’s sisters. There were no questions about Mockolate.

The last round came upon us. We were the high scorers, so we were automatically in the last round. The other two teams did a lightning round that was even more intense because it involved two teams and more time and back and forth questioning.

The final round involved Perfection. Remember that game with the shapes and the timer and the board that pops up and throws all the shapes out of their slots when the time is up? Yeah, so you had to do that game while answering trivia questions about Friends Thanksgiving episodes. And since S is the expert, she was the one who had to do this. S doesn’t like to be the center of attention, so this was an interesting turn of circumstances.

I’d like to take a moment to acknowledge that I looked something up. A rare occasion.

But back to the trivia! S got every question right, including the question about what goes in Rachel’s Trifle–which I knew because that was in my notes–and she got some pieces into the game board. At one point, I did interject the very helpful advice, That piece doesn’t fit there, as she spent a good amount of time trying to place an octagon into a hexagon. I had a better angle on it. She had better trivia knowledge.

The next team went, and they got a whole lot of pieces in. However, they got fewer trivia questions right. Their last question was What dish was Chandler in charge of? S and I snapped a glance at each other right away.

The answer to that? Cranberries. Or, shall we say, Chanberries?

Which was our team name.

And The Chanberries won trivia!

After years of coming in second, S has won trivia. I told her she can never go to Friends Trivia again ever. Because, you know, winning.

We talked to the host afterwards about playing Perfection (the above clip never came up because I just realized it now, but I wonder if it was a subconscious choice). She said she wanted it to be an intense challenge. We were like, mission accomplished. Then S said to me she thought they should advertise it as Extreme Friends Trivia. Ha! Not a bad idea. It was the most intense trivia I’ve been to. This kind of makes sense because the guy over at GC is probably the most intense person I’ve ever met. So Extreme Trivia it is, at least in our minds, and we won it. Yeay! 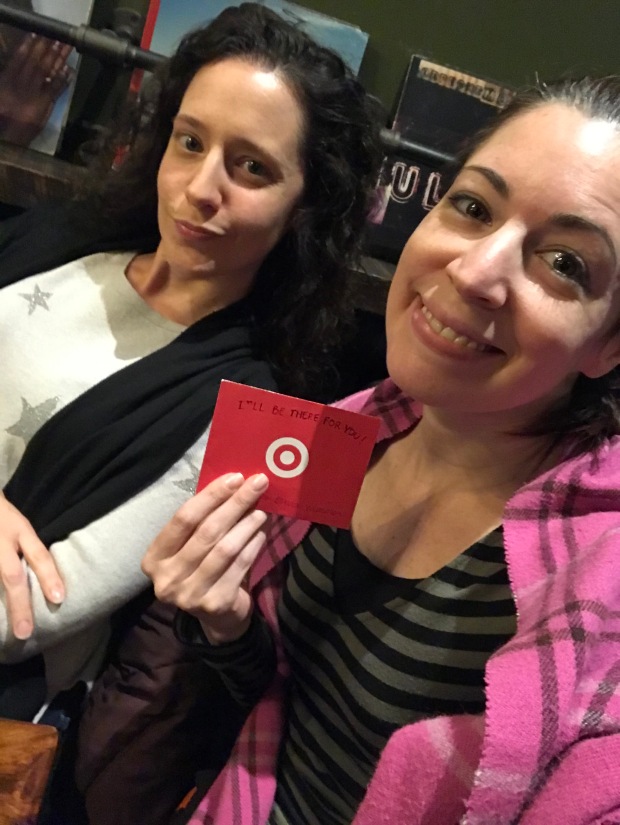