Two or three weeks ago, I planned to do two things and wound up doing four. Happy to take myself into the city to see art and exhibits and make myself think.

For the past week, I’ve had a stress headache because COVID 19 has taken over the world. It has shut down the city and the suburbs.

So here’s a way to get out of your head if not out of the house. I’m going to remember my experience in a way that might let you live it for yourself. (My creative writers and my lit readers would be very excited that I’m practicing what I preach about second person pov). And away we go.

It’s the first time you’re using the MTA app’s eticket for your train ride into the city. You don’t have any idea if you need to leave it open, leave your phone on, if you can use other apps. You brought your charger in case your phone died on the ride but also you charged it until the minute you left the house even though it was already at 100% and you thought somehow it would suck in some energy reserves. You are in a car with the bathroom because nine times out of ten, you manage to sit in the car with bathroom. You activate your ticket only to realize there’s like a quiz to take to make sure you mean to activate your ticket, and really, this is not the kind of decision you thought you’d have to make, so now–as usual–you’re breaking out into the nervous sweats. Then the conductor comes by and barely says anything to you because your little eticket is flashing pretty colors. You let your phone sleep as you read your book that you started a few weeks ago and haven’t gotten back to because all those papers and meetings. You change trains and your eticket continues to work as you continue to read. You stop sweating. Sweet relief.

You take a walk downtown to find the David Zwirner Gallery. You already missed the doppleganger exhibit, so there was no way you were going to miss the Doug Wheeler one. You walk down and across and down and across and finally get to the street where the gallery is, and there are other people trying to find the same gallery because there are a lot of choices of doors. The sun is out and it is windy and the galleries are by the water so you are a little chilly as you try to choose the door that will get you to the exhibit. It’s kind of like Let’s Make A Deal for the art world.

The couple with the stroller ahead of you have chosen the correct door, which means they win! Which means you win because you get to see the artwork, too! The exhibit on view is a light exhibit. It looks like this. 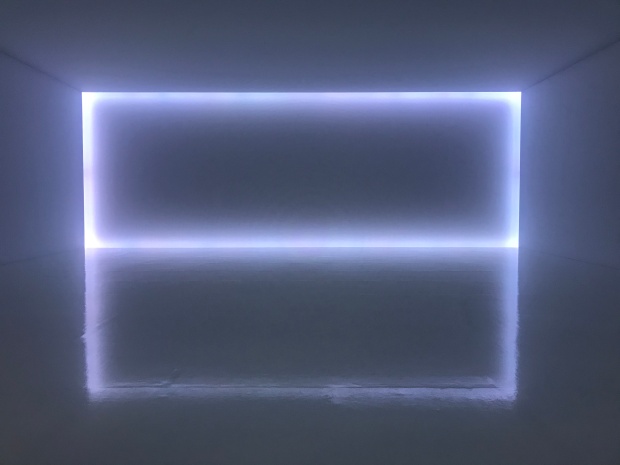 And maybe that looks interesting but also some may ask, Why did you walk all that way on a windy day to see a framed box of light? Then you realize that this photo does the exhibit no justice. Here’s what it looks like again: 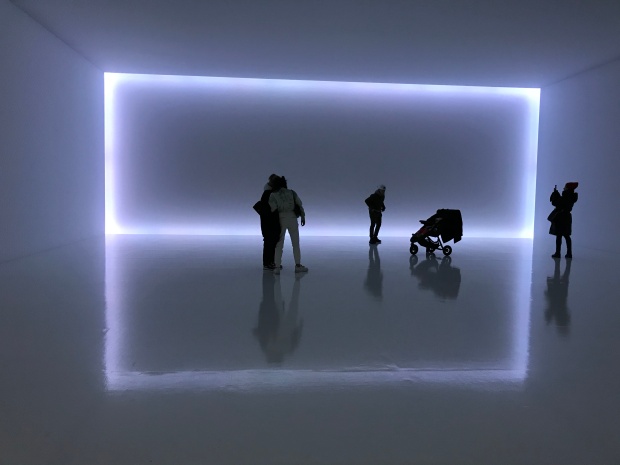 Ahhh, an entire lit up room wall thingie of light! It’s pretty groovy. You walk up to the light to see where it’s coming from. The wall curves under the floor. The light emanates and radiates from all around the wall that seems to be attached but also not attached to anything. You stay for at least twenty minutes, watching people look at the wall. 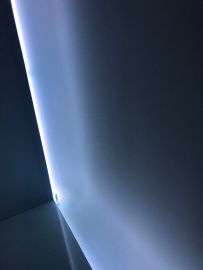 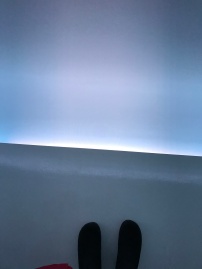 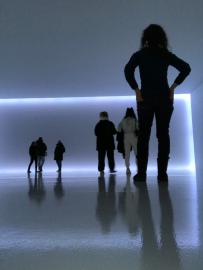 When you decide you have seen enough of the light wall, you leave the gallery and see a sign for Basquiat. The other side of the sign says Warhol. Go you must. So instead of keeping with the plan to go straight to the museum, you head over to Taglialatella Gallerieson 10th Ave. Your first fun find there is Einstein. He’s got a good message. 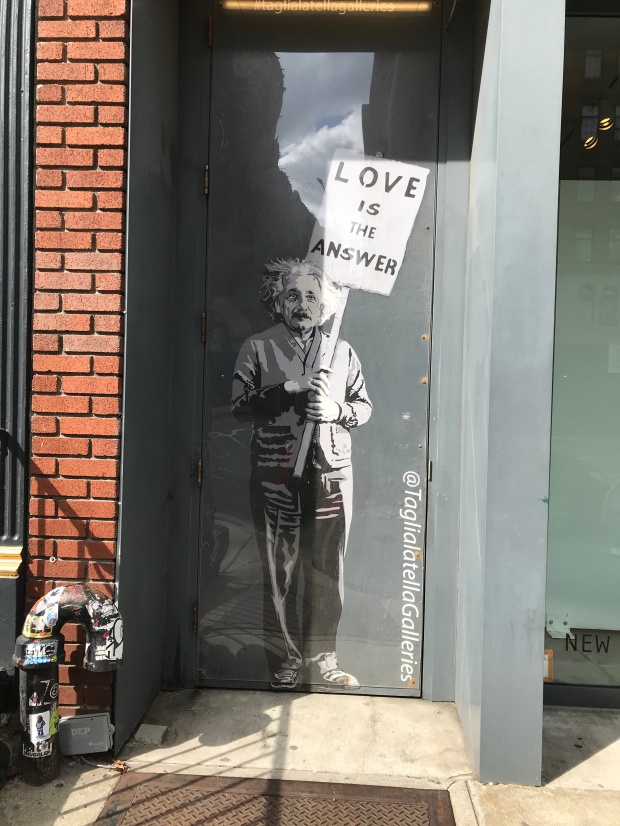 You go inside for the Basquiat, but before you even get to that, you’re floored. They’ve got Keith Haring. They’ve got a bunch of sparkly silkscreens from Russell Young. There are artists with names like Jerkface and Mr. Brainwash. And then you turn the corner and Good God! It’s a Lichtenstein! (That’s for your brother). You do find the Basquiat and the Warhol, and you bask in their artistic genius. (For more about your experiences with Basquiat and Warhol, you can go here ). 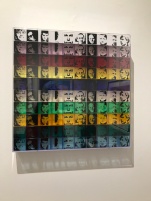 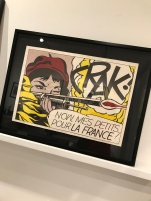 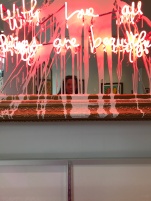 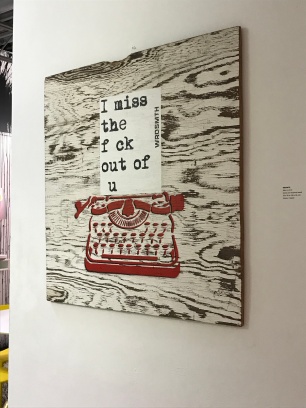 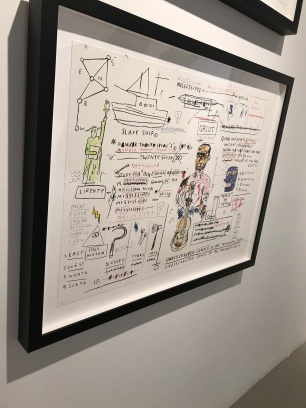 Because you’re so close to it, you head up onto the Highline. It’s got free public art! And RuPaul! 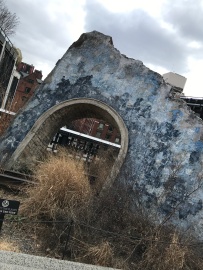 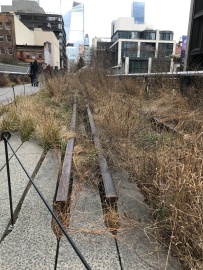 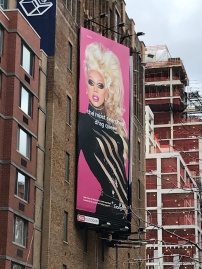 You realize that it’s cold up here on the Highline, so you walk quickly. The sun comes out, and you slow down to bask. The sun goes back in, so you pick up the pace. Some young woman runs up behind you, calling out, Hey excuse me! You turn and see she’s holding out a $5 bill. She says, You dropped this. You say, Oh, hey, thanks! She runs off, and you almost skip the rest of the length of the park because there’s still human kindness in this world.

So happy are you that you overshoot your landing and get down off the Highline around 14th when the Rubin is on 19th. Then? You. Get. Lost. You look at street signs, expecting to see numbers and instead you see the word Washington or something. What is this non-numbered sign all about?

A few more turns and double backs, and you finally find The Rubin, your new home away from home. You are so thankful that you’ve found it because you’re super cold now and you have to pee really bad. They have a bathroom! You know that bathroom well because it’s the bathroom you brushed your teeth in when you slept there a few months ago. (Here, “slept” means “had weird half asleep dreams while half asleep writing them down only to find they make no sense and your handwriting looks like the writing you find in a journal kept by a murderer).

More from the @rubinmuseum #dreamover — what I wrote down as I was in and out of sleep, what I remembered for dreams. Clearly, I’m a maniac. #rubinmuseum #nyc

Remember that time I slept at the @rubinmuseum for the #Dreamover? We also had the task of drawing our artwork from memory. Here’s what mine looked like. Museum. Quality. Art. #rubinmuseum #nyc #boddhisatva 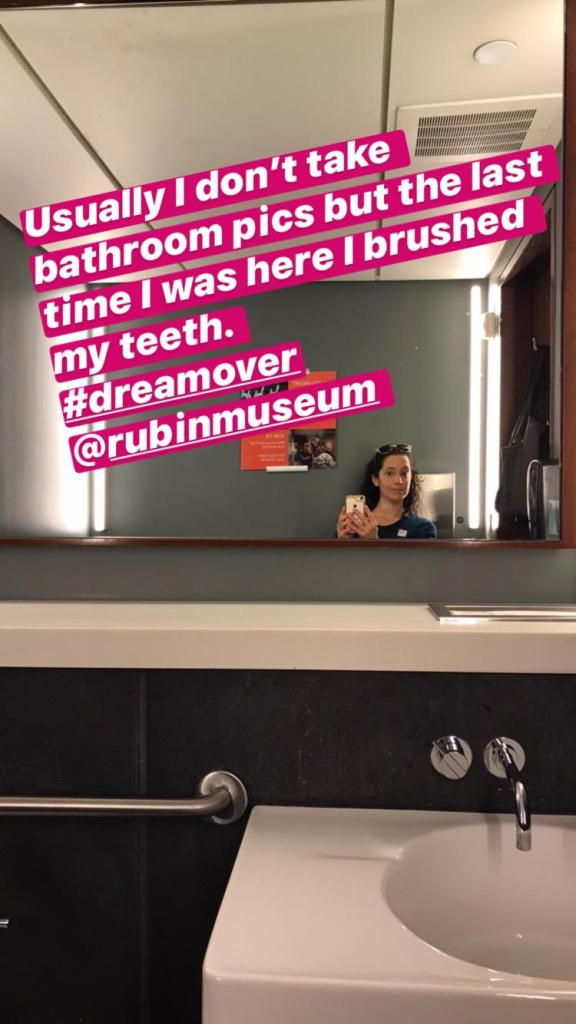 You check in on your old friend, the Bodhisattva. 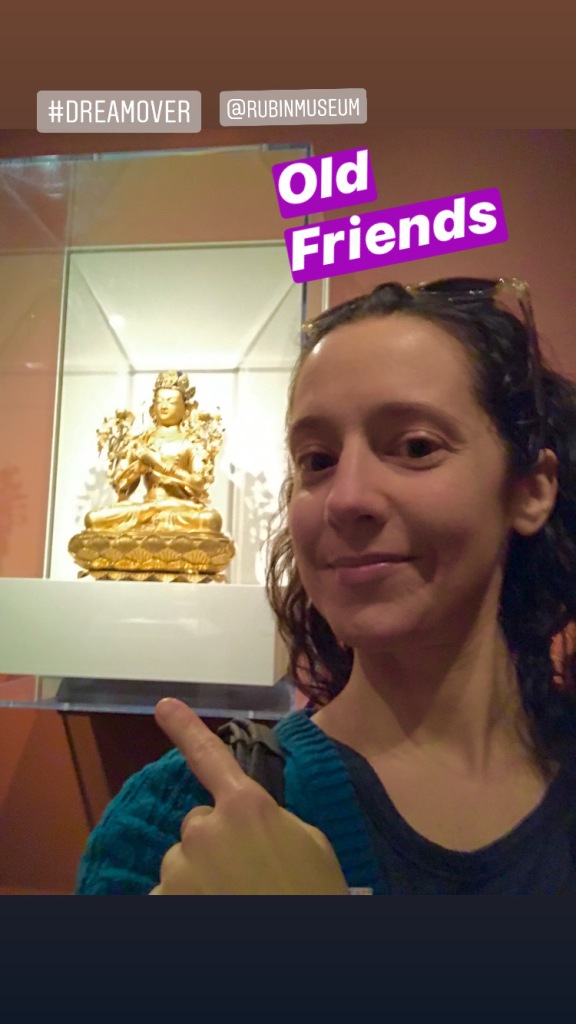 Then you venture into the exhibit you’d been itching to see, Measure Your Existence. The main reason you wanted to see it is it has interactive components, and you love to touch things in a museum.

The first piece is a carpet of candy. You get to take a piece of candy. As the pile dwindles, the museum replenishes it. Measure the existence of candy. 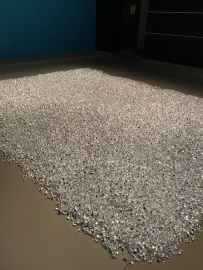 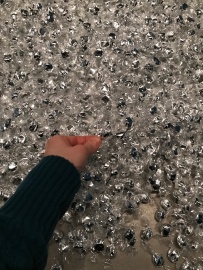 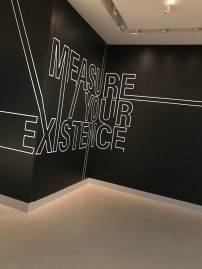 Then you see a little booth. You have to take off your shoes to go inside. You can write a letter in there, too, so you do just that. You seal it and address it. The museum will eventually send it. 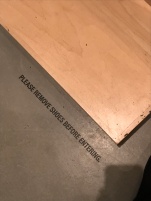 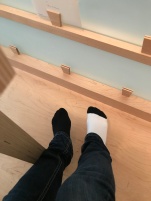 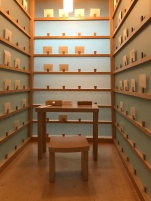 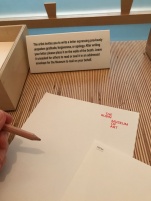 When you emerge from the letter hut and put on your boots, you notice a woman sitting at the other writing desk, and she’s weeping. You teared up writing your own letter. You assumed a lot of people probably cry when writing. Here is the proof.

Around the corner you watch a snippet of a film about a guy calling different companies and talking to whomever answers as if he’s talking to his mom, and then he realizes his mom is dead. It’s subtitled. It’s a weird concept. You stop watching.

You then watch an animated film and listen to the meditative soundtrack. You’ve got those big headphones on again. You always wear headphones in some capacity when you come here.

Then you decide to shake hands with a bronze hand. You’ve seen it before and have not shaken the hand. Today is the day you shake the hand. It’s not creepy. But actually, yes, it is. 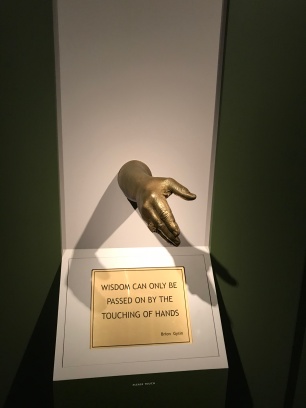 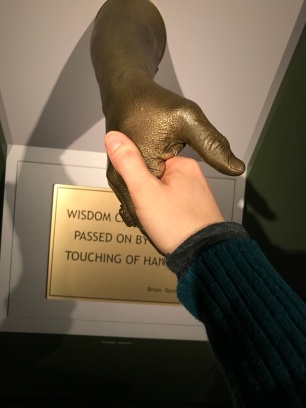 You think about going to see the Impractical Jokers movie but the movie times don’t jive with your train times. You walk back to Penn, taking in more art along the way. 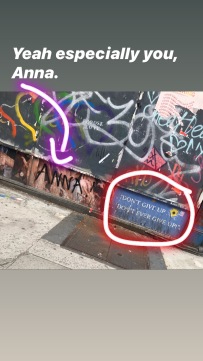 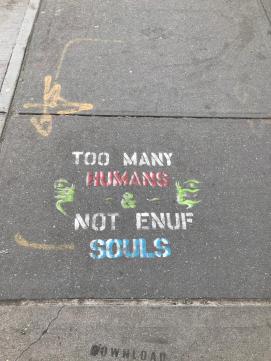 You wind up waiting at Penn for half an hour, which gives you plenty of time to start worrying again about using the MTA app eticket. It also gives you time to read more of your book, and you get halfway through it.

Then about a week later, you get some mail that makes you smile. 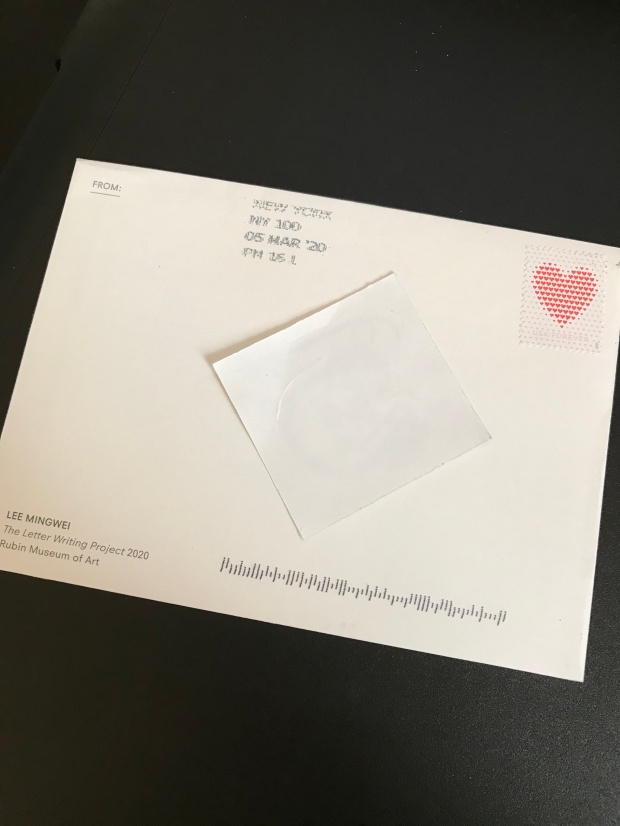 You know that the only true way to measure existence is in gratitude. You thank the universe for everything, every single thing.

One thought on “Measure of Existence (Apparently, A Tribute)”

At the beginning of Autumn, an urgency to read @cherylstrayed ‘s Wild struck me suddenly, so I began reading and raving about it, especially to my yoga classes: lessons in letting go, allowing the universe to do what it does, learning how to react to everything out of our control, and discovering who we are at every moment.
Current ailments: lower back, hips, thighs, right wrist, right thumb, left wrist, right foot, left foot (from the Great Mystery Illness of earlier this year when I didn’t realize I was sick until day three simply because I rarely get sick to the Very Unnecessary Surgery of July, this little body has been going through it, quite resiliently)
Words go here. As a poet, I usually have a lot of them, and I’m all for making some up, too. Still, in this moment, none come to mind to describe what I’ve felt this year as the first Poet In Residence for Cedarmere.
Some positive reinforcement for creative folks appears in Your Art Will Save Your Life by Beth Pickens. The advice appears between descriptions of specific political climates and shows how creativity and politics can work together, but if that’s not your bag, that’s okay. The author suggests to take what works for you and leave the rest for someone else, which is the same advice I offer in life in general. Creatives, keep creating.
A belated thanks to Skink Beat Review for giving my #poem a home. Read “Scenes From The Setting” in its entirety on page 7 of the June 2022 issue.
This is a book I rushed home from wherever I was and whatever I was doing to read. The characters and storyline are unshakable, which doesn’t matter because I didn’t want to let go of any of it. I could hear the music. I could see them jam. Daisy Jones & the Six seems to live on past the pages. Thanks tjenkinsreid for writing this.
Loading Comments...
%d bloggers like this: