I’ve got a summer wish list that I’ve been checking things off of like a woman on a mission who must get all these things done before the bus explodes. You know, like Sandra Bullock in Speed but without Keanu Reeves and without a bus. The reason I’ve been mission-izing my wish list dawned on me in a moment of clarity while microblogging: I’m trying to prove that I can have a fun time on my own without the help of anyone else, thank you very much, so you [most recent guy who broke my heart] can suck it hard. This moment of clarity allowed me to discover the following:

Most items on my wish list involve nature. I’ve never considered myself a nature girl. Here I am in the summer of quarantine, visiting every state park I can with a handy Empire Pass in my back pocket. Something about lockdown brings out the need for nature. Also, Long Island is beautiful, and I want to explore it, especially since travel is out of the question right now.

One of my friends used to work at Sunken Meadow State Park, and all during quarantine he’s been regaling me with these neat vignettes about his antics. What better guide to have? We met up in the parking lot with him driving around to get me and bring me to where I needed to go to start, which I told him was 85% going to happen (the %15 percent that I would wind up in the right place when there are lots of lots to choose from was generous). Then off we went, onto a trail and over a bridge and I stopped short.

It. Was. Gorgeous. The sky was overcast, and the clouds were moving grey, and the water was running right under us, and there were birds, and the mountain shone so evergreen (okay, it’s not a mountain. It’s a big hill. But maybe a mountain. I don’t know. I’m new to nature, remember).

We went up a path, found a picnic area, and went up another path, and then another kind of steep path. At the top of that one, he stopped and was like, Yeah, that hill deserves a break. Lungs pounding, I stopped too and was like, Thank you for saying that because I thought I was out of shape for a moment. He told me on the other side of the fence nearby was a hill called Cardiac Hill. So what did we just climb? I couldn’t figure out how it could be much different since the fence was simply separating us from the same mountain/hill/land-incline.

Then suddenly, I was walking on a ledge and then through a forest and we were in the woods, y’all. And then through the woods, up and down and on steep and narrow winding paths, I reminded him, If you encounter a really large gap, we’ll have to double back. Because, you know, I’m short, and I wasn’t about to leap over a gap when the landing was wide enough for only one of my tiny feet. Luckily, no leaping was needed, and we came to the bluffs, and we were at the beach. 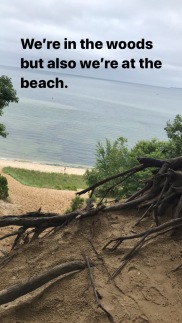 How does this even happen? Whoever complains about Long Island needs to be dragged up Cardiac Hill and rolled down a beach bluff.

We got down to the beach, and he gave me options: walk back through the woods or walk on the beach. The beach! The beach! The North Shore beaches are rocky and narrow, and since I’m a South Shore gal, I don’t get enough of these other kinds of beaches.

Apparently, when you’re from the North Shore, you skip rocks. When you’re from the South Shore, you do something you call skipping rocks, but all you really do is throw a rock into the water and watch it sink. We tried this several times, my friend showing me form and flicking and finding of the good rocks, and me side-winding and twisting and tossing a rock into the water with very little hopping and a whole lot of going under without much fanfare.

Also along the beach were fishermen. Which meant I walked by a full fish dead on the sand. Also dead was a large crab thingamajig with a long pointy tale, drifting in the shoreline as if it were once alive and decided to be dead to freak me out.

Actually, I am somewhat proud of myself. When we finished that path, my friend was like, but wait there’s more! We went down into another part of the park where all these little hermit crabs crawled around, in and out of holes. Crabs walk sideways, y’all! Like, I know this, but like, now I really know it.

At that point, thunder rolled and a bit of a spritz started. He was like, Are you good with rain? I was like, rain doesn’t make me melt, so I’m fine except if there’s lightning. He was like, Yeah, if you see the hair on the top of my head start to rise up…, and I jumped in, Yeah, I’ll take cover, for sure. He stopped and was like, Or maybe you can tell me first as a warning. I make a great friend sometimes.

No lightning. No hair on end. No taking cover. Well, that’s not completely true. We went semi-covered in a semi-covert operation to get a picture of a bird that I decided I wanted to stalk. We’d been talking about a recent new story about a woman who got too close to a moose and was pretty much jacked up by the moose when she got too close. I think everything about that story is right. Leave the animals alone. Follow the rules. If you break the rules and annoy the animals, you get what you get and you don’t get upset. Okay, maybe you get upset, but you deserve it. A little over an hour later, here I am in marshy territory, sneaking all up in this bird’s business because I decide I want to be friendly with the animals instead of being grossed out by them (in my defense, both animals I encountered on the beach were dead, and that’s freaky). The bird kept flying away from me, and then I decided to maybe leave it alone before it went all Hitchcock on me. 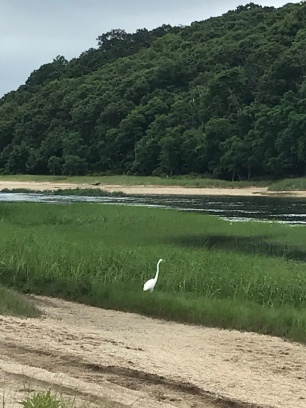 We came up on the boardwalk. We walked over two more bridges. We finished a whole lot of the park, which meant we’d finished a whole segment of the Greenbelt. The Greenbelt trailis 32 miles running north and south. In my days at Heckscher, I completed some of it. Now here I was at the other end, another segment complete. Is it possible to complete in one day? My Great Saunter experiences point to a big fat No for me.

With sand in my shoes, wind in my hair, sweat on my skin, and a hum of sky in my ears, we finished the hike, regrouped in our cars, and called it a day.  A great day, for sure.