About three years ago at Mind Over Madness: Summer Solstice Yoga In Times Square, I stood in a short line having arrived pretty early for my time slot to practice. Next to me and then in front of me and then behind me and then again next to me was a man who clearly was not there for yoga and was clearly high on something. I kept my nose in my book. Then a woman arrived behind me and wasn’t sure where to stand since this man was fidgeting between being in line and being on the other side of the barrier. I took my nose out of my book and stage whispered, I don’t think he’s on line. And that’s how I met my yoga gal pal. We chatted about yoga and working out and all other fun kinds of things. We put our mats next to each other and practiced together. We waved at ourselves as we were broadcast on the big screen overhead. We went through the yoga village together, and then we parted ways, saying that we’d get together again soon.

That was the year of my yoga teacher training. I had every intention of getting together again soon, but my hip labra had other intentions. Remember that time I couldn’t walk or sit up for two days?Yeah, that was fun. And then the next few years were all jacked up for various reasons including but not limited to death and disappearances.

This year is also jacked up (in case you haven’t noticed). I started having a really good year the second half of last year, and this year started out with such tremendous promise. Then the virus. Then the riots. Then the heartbreak. Then the descent into the deep dark times of Christina’s mind.

A really shining light are all the folks I know who radiate positivity. A lot of my yoga friends do just that. Scrolling through Insta, I saw my summer solstice yoga gal pal yet again posting something vibrant and fun, so I messaged her, told her I was down in the dumps, thanked her for being so positive all the time. She instantly messaged back–let’s get together soon.

Three years and a few rain dates in the making, we met up at Bear Mountain State Park. The sky shone gray, the mountain shone green, and we headed out to climb to the top. At first, we went down to go up, which we thought we had to do. Then we wound up on a road, so we went back to the parking lot booth attendant who pointed us in the opposite direction. I’ll reiterate that I’m directionally challenged and have no shame in it.

We had a choice of trails. We opted for the one where we wouldn’t have to bear crawl and scramble. This alternative is basically giant steps built into the mountainside. This is why the overcast sky was a plus. Climbing those steps in blazing sun would be more difficult. We climbed in humidity and heat, which was enough.

There were a lot of people on the trail in certain pockets, but for the most part, it was empty. Probably because we started out around 8:30 AM. This is my kind of hang. I love early. We took a little over an hour to get to the top. We’d stopped at certain points to look out over the landings and take in everything far and wide. The sun peeked out at times, so the rays came through like literal beams. Spectacular. 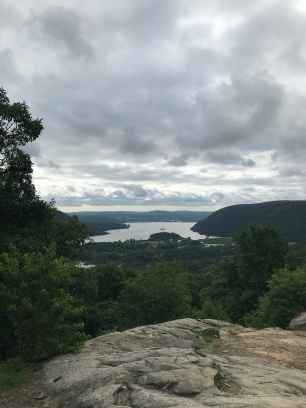 Then we made it to the top. Wind whipped up from time to time. Otherwise, it was so peaceful. Forget the mountain. We were on top of the world. 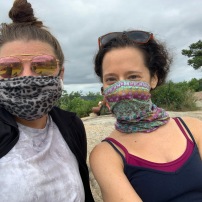 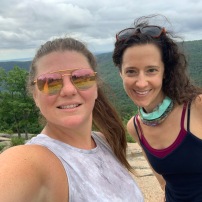 We sat for a while, and then it started getting crowded for real, mostly because it was getting to be later. Heading down, we encountered so many more people. It’s interesting sharing a path with people because some don’t want to lose momentum going up but going down is hard to stop momentum. We also noted the variety of clothing choices some hikers had made. I’m not sure why you would want to hike in a dress (my friend was like, It’s a photo op, and I was like, yeah you’re totally right).

It was about noon, so we headed to Peekskill to a coffee shop that we couldn’t find. We found Bean Runner Cafe that had a back patio so we could eat outside. That was a score. Their menu is Olympics themed, and as we all know, I love me some Olympics. Another plus was that the other people on the patio finished up as we got our food, so we had the place all to ourselves. Another plus–the food and coffee were delicious.

Next door was Third Eye Arts Studio and Gallery.  We popped in, and the artist, Nadine Gordon-Taylor, showed us the artwork and said we could pull cards from her deck, too. This was our kind of gallery. Also, there was a Rumi quote on the door. Soooo much our kind of gallery. We each found a piece of art we loved. Then my friend pulled a card. The artist read what it meant. Everything about the card was everything we’d been talking about during lunch. Trippy.

Then I pulled a card. I’d been torn between two pieces of artwork. The card I chose was the other piece of art I’d been torn over. Trippy again.

We each got a piece of artwork plus a business card that had a mini version of the card art we’d pulled. This was a huge score. She’d told us how she had been running events in a loft for year that were now on hold. I told her I’d love to do a reading there, and so we all exchanged information. This is how to network during a pandemic. Hike up a mountain, go get coffee and lunch, and then stumble upon a groovy gallery.

In yoga, everything works out as it does. That’s all there is to it. So this day up on a mountain unfolded as a much needed perfect day for sure.

Last time I was here a few months ago, I was 15 pounds lighter and full of spirit. I’ve scolded a few pairs of pants, some skirts, and several shorts for fitting more snugly, and I’ve been frustrated at losing some of my spark. Also, I recognize that I’m healthy, and my life is brilliant. I’m thankful for park walks and sunshine and friendships and for being able to move forwards.
What’s the word that’s kind of like eerie but also means terrifying in the way that Severance predicted the end of days that began with needing to wear N95s? This pre2020 novel by Ling Ma also explores how we share information, the inside scoop of book making, what city living is, and the impact of our memories.
Getting a little judgey every now and then can be good for judges and judgees alike. Reading I’m Judging You by Luvvie Ajayi Jones is good in the same way; it allows us to pause and really think about how we act and how we treat each other. Also, she makes up words, and I’m all for that.
I teach good sometimes.
Thanks to St. John’s Humanities Review for sharing three of my #poems in their Crashing The Canon issue.
Last summer, I went to an outdoor artsy festival at a brewery. That was my first encounter with @colored.colors . Almost a year later, I’ve read #poetry a bunch of times for #PoetsMeetMusicians at @lithologybrewing , I’ve spoken on a panel at @fireislandvines , I’ve had my poetry appear on an exclusive beer can, and now I host Sunday Funday Book Club at @hopsscotchny . The wonderfully creative people I’ve met along the way have inspired me and brought me so much joy. I hope I do the same for them. Incredibly grateful for #coloredcolors, my #creativecommunity, #longislandpoets, #longislandwriters, and the venues who continue to support us all.
Loading Comments...
%d bloggers like this: