Conferencing: going to a conference.
As in: I’m conferencing because AWP is in Portland, and I’ve always wanted to go to Portland. By “always” I  mean since I found out about the donuts.

Paneling: being a person that sits at a table and talks during a session at the conference
As in: I’m paneling with other community college faculty to discuss why creative writing programs are growing while overall enrollment is shrinking. My panel went really well. I gave a presentation complete with Willy Wonka and Oprah memes (you can see that and more here: Why They Keep Coming ). Also at my panel, I re-met a guy who lived a parallel life with us both having connections to NCC, Oneonta, and Hofstra. It turns out we were once in the same room talking poetry more than a decade ago. Here we are a decade later, talking teaching poetry.

Tabling: sitting at a table, eating candy, chatting with conference goers, handing out fliers and buttons.
As in: I’m tabling for the caucus and I’m tabling for the Cambridge Writers’ Workshop. Tabling was fun. I got to meet the good folks at Gunpowder Press who shared their table with the caucus. I got to meet and reconnect and share bookish fodder with the writers connected to CWW. I got to get people to sign up for the caucus and for information on future CWW events. And the candy. Oh, the candy. 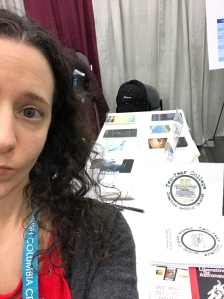 Caucusing: um. okay, so I asked around and looked it up and I’m pretty sure a caucus is a smaller group with in a bigger group.
As in: I’m caucusing with the Two Year Community College Caucus at AWP. The two year group is part of the bigger AWP group. I think. In any case, I went to the caucus meeting and met other caucusers.

Fountaining: taking oneself on a walking tour of Portland, OR to see all the municipal fountains listed on Portland’s Municipal Fountains website.
As in: I went fountaining the day I got to Portland. It was raining, so I did it in the rain because that’s what people do in Portland. They go about their day as if it is not raining. Otherwise, they wouldn’t do a whole lot because there’s a lot of rain. I found most of the fountains using a list and a paper map. Since I get lost in large parking lots, I was friggin over-the-rainclouds proud that I was able to navigate without getting lost. Wherever I couldn’t find a fountain, I took a picture of where I thought it should be. (You can hover over or click on any photo to see which fountain it is). 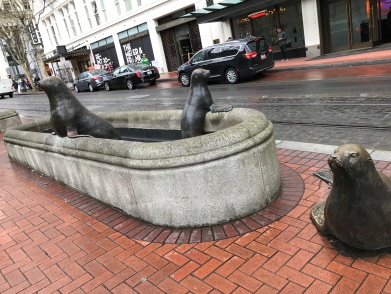 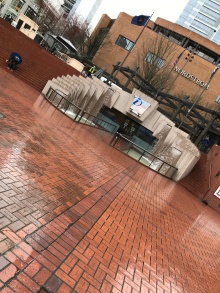 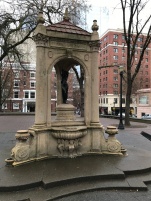 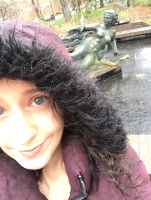 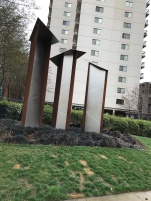 *Not* The Source Fountain 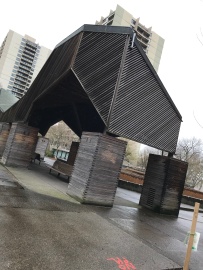 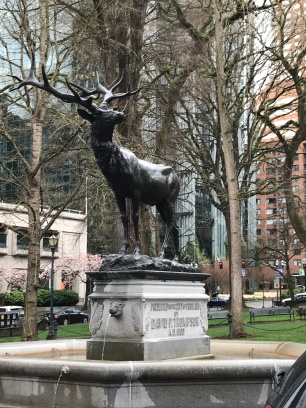 Fact: The next three days, it did not rain, and I did this all in the rain when I could have waited and not.

Lyfting: taking a Lyft; closely associated to Ubering: taking an Uber
As in: I’ve never taken ride shares before, but I didn’t rent a car, and public transportation sometimes confuses me, so when the Uber my roommate called for wasn’t right on the corner right next to us when the app said it was, I used Lyft for the first time. As a first time experience, it was not good. At minute intervals, drivers kept dropping out and then a new one would be a few minutes away. Watching them on the map proved to be confusing because they kept coming close to the street we were on and then not turning on the street to get us. Most of them were named Tim. We wound up with a nice driver who told us he came to Portland for the weed business and now he was driving but he used to be a rapper. So, you know, I made a friend because sci fi fem poetry is almost exactly the same thing. Bobbee Papp is my hero. 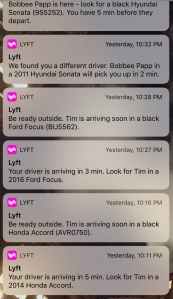 Doughnuting: eating doughnuts. or donuts. but really, doughnuts.
As in: I rejected Whole 30 to take up the art of doughnuting in the name of Voodoo Doughnut. And NOLA Doughnuts. And planned a few more, but my little body would  have given out to sugar shock, so I settled for some Skout bars and yummy local fare on Mississippi Ave to round out my eating experience. Oh, and some ice cream too. And the very best almond milk decaf latte I’ve had in my life from Dutch Bros. Coffee. 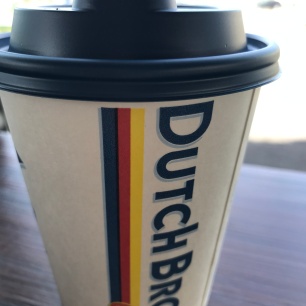 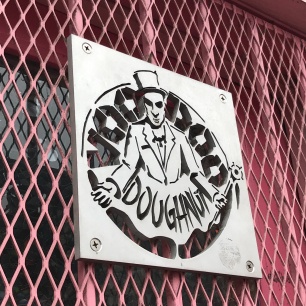 And I was happy.

Bookstoring: getting lost in books on shelves
As in: Bookstoring at Powell’s was super overwhelming. Bookstoring in Another Read Through was less overwhelming, and there was a wine and kombucha and tea tasting there! Books and tea! 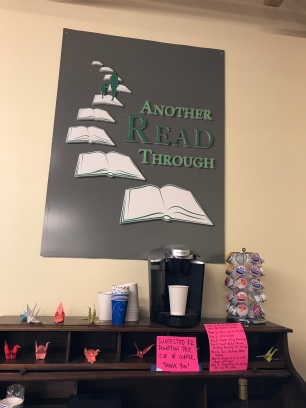 Portlanding: taking in all that the city of Portland has to offer, or at least as much as possible when not conferencing, paneling, tabling, and caucusing
As in: Portlanding Is Magnificent! 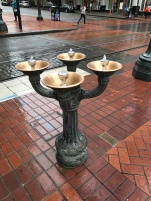 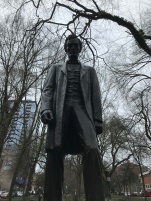 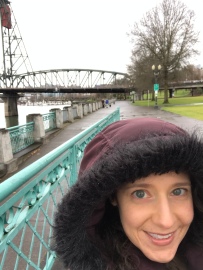