My brother the history teacher/photographer and I the poet/all around geek set out on another tour of almost-edge-of-central New York. This time, it was all about artillery. The plan didn’t specify “see as many cannons as possible in one day,” but our touring led us to do just that. In addition to cannons, we also saw creepy things, maps, sweeping landscapes, and torrential downpours followed by walls of humidity that we felt and breathed in as well. Basically, it was your typical summer day of I Love NY frolicking.

We first stopped at Knox something or other. It’s not very memorable because we couldn’t go inside. It was a building. There was a sign covered in bugs I’d  never seen before. There was a guy with a parks shirt on who disappeared. So then we left. Fun times.

We made our way to the National Purple Heart Hall of Honor which is on the grounds of Washington’s final cantonment. Here is a word I cannot pronounce no matter how many times I hear it. It’s like a fancy word for camp. The Hall of Honor is one of the saddest places I’ve ever visited–and I’ve visited Dachau. The museum shows the history of the Purple Heart and houses the only known original patch from when Washington first created the honor. The entire history of its development is on display.  Many veterans were quoted as saying it’s the honor you don’t want to get (because you have to be injured in battle to earn it) but it’s the one that makes them most proud. We watched a film that documents veterans sharing stories of how they earned their Purple Heart, and some of them earned more than one. I sat there feeling pretty pathetic and sad. Anything I can do for a veteran, Purple Heart or not, I’m always up for because I know I couldn’t possibly be in the military ever. 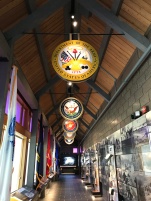 We checked for our uncle in the roll call. He’s not listed so we got the information on how to get him on there. If you know someone who’s earned a Purple Heart, have them fill out this information and get listed. They deserve it.

The cantonment was a whole other kind of place but in the same place. I think it’s set up for kids because there were things to touch and lift and poke at. There was a whole lower level of artillery. Quite a few cannons. You think you’ve seen one and you’ve seen em all, but nope! The French decorated their cannons like dolphins!

The grounds sprawl more than they seem from the entrance. We found all kinds of structures, some that had original pieces like doors and battens. There was a hole in the floor in one building and we found out it was because of groundhogs. We didn’t see any animals, but after that, I was on high alert. 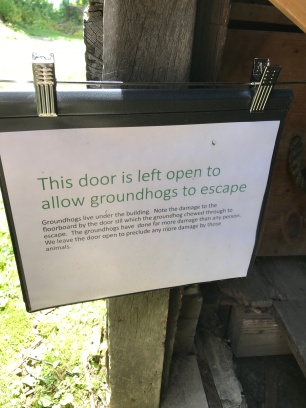 Keeping with the theme of Washington, we headed towards his headquarters. Which was under construction with a new roof and some other things happening across the grounds. It didn’t exactly scream authentic from the outside with all the pick up trucks and equipment, but the inside was preserved as if Washington were still there. We got a personal tour because no one else was taking the tour at the time we arrived. We learned that people from that time period slept sitting up or grown men had to share beds that seemed to be children’s sized. All these beds folded for travel.

Also, at that time, if you wore glasses, you were thought to be disabled and weak and shunned. Washington wrote in really big handwriting, and only once did he put on his glasses in front of his men. They saw it as a sign that the war was taking its toll even on the great Washington. This is why I wear contacts. 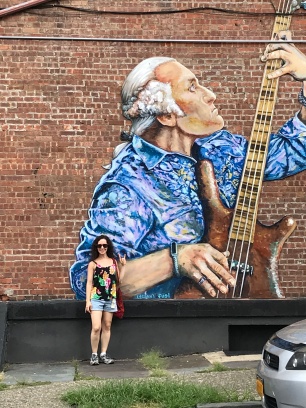 Onto Fort Montgomery! Where the skies opened and rain basically plopped down all at once. This kind of rain was the kind that didn’t cool anything off and made the outdoors seem like invisible soup. From fog comes cool photos, though. Plus, my brother and I found the Appalachian trail, a trail we once tried to hike together several years ago but wound up on different mountains and never met up. We finally made it together at Fort Montgomery. We didn’t go very far, though, because mud.

After overhearing a very confusing conversation between my brother and me about geography and my lack of spatial understanding, a woman behind the counter offered to show a film to us. We watched and  learned a bit more about the attacks during the war. Out in the lobby, there were more firearms plus mannequin-like men in positions of being in battle that was off-putting for my tastes. See? This is why I can’t be in the military. I can’t even hack it with fake soldiers. 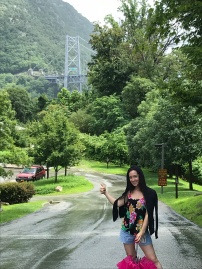 After that, we arrived at Stony Point State Park. We had an animal encounter but it was okay because we were in the car and it was in the woods. They have a lighthouse and a small museum. They also have an outdoor set up of what a military camp might look like. Plus, all the way at the top of the hill, there’s a lookout point. Plus plus, another cannon. 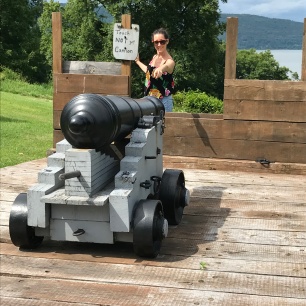 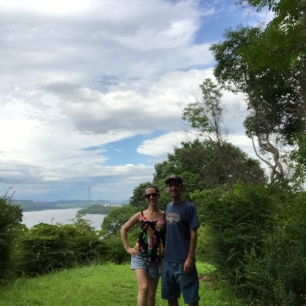 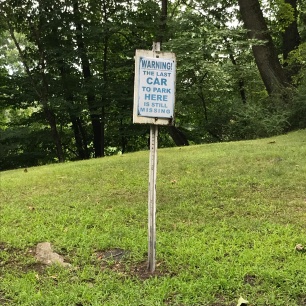 We traced many wins and losses that day. Spoiler alert: We won the war.

To celebrate, we found a diner and ate while the second round of torrential downpour spouted out of the skies. By the time we were done, the sun was shining again and we walked out into a wall of thick heat that made my brother’s glasses fog up. And that’s why I wear contacts.

DC’s Joaquin Miller Cabin Poetry Series has shared poetry for over 40 years. It used to be held in the actual cabin. I thought I was going to read in a cabin. I was ready to be sweaty and buggy. However, these days, the good folks who run the series project photos of the cabin on a large screen in an auditorium in the Rock Creek Nature Center, an air conditioned space with no critters abounding.

I’d like to reiterate: I was willing to read in a cabin with possible non-human living creatures and possible humidity that would frizz my hair out and increase my usual sweats tenfold. Gold star sticker for me please.

Really, this take-it-on-the-road poetry-reading thing becomes me. Meaning I dig it and I wish for it to continue. Not only do I get to share my work with people I don’t know, I also get to hear what’s going on in the poetry realm of others. Plus, sightseeing. This is all I want in life. Poetry and travel. And cotton candy without cavities. And these peppermint crumbly things you can buy in a bucket from CVS. And snow without shoveling. And Train concerts every night. And line dancing. And yoga. And tea. That’s all. Is that too much to ask?

The poets at Miller Cabin were delightful! Talented. Insightful. Witty. Open to my antics, which is always a plus. (If you haven’t seen the dog and pony show, come see it some time. You’ll get at least a sticker). I hope to keep in touch with them and maybe read there again in the future. 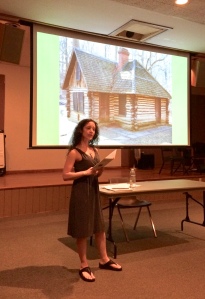 As for the sightseeing, one of the officemate-friends took a ride down with me and together we saw some sights. We popped by Politics and Prose to hear Kim Roberts present on DC literary history. We also headed to the National Portrait Gallery mostly to see the Obama portraits, but then found portraits galore. And then found lots of art that wasn’t portraits, and I was confused until I realized that half the building is the portrait gallery and the other half is the American Art Museum. They’re both Smithsonian and they’re both FREE! The art gallery had an exhibit about redacted landscapes, so if you’re paranoid about conspiracies already, that might not be for you. Or maybe it is, if you’re looking for affirmation. All I know is that LL popped up in the portrait gallery, and that made my heart soar. 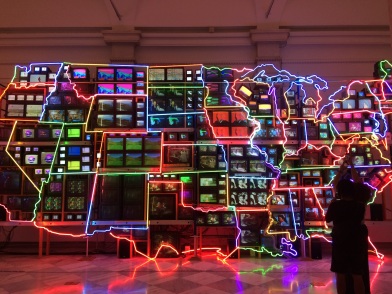 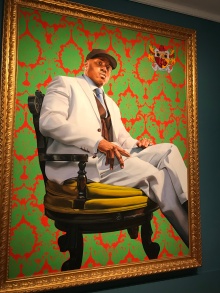 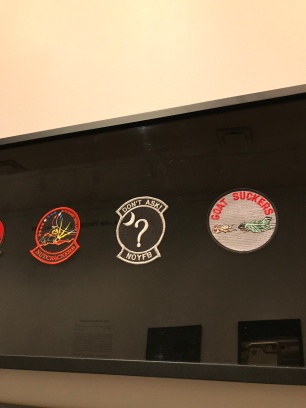 Also free is walking around the Tidal Basin. Not free is the parking unless all the meters at the Tidal Basin are all jacked up. In which case, you can call the number on the meter about its jacked-up-ed-ness, and then leave a message about it and then have the machine that takes the message say Thank You and hang up on you. We didn’t pay the meter, and we didn’t get a ticket, thankfully.

All around the Tidal Basin are monuments, most of which I hadn’t seen in my most recent DC trips. The FDR monument sprawls magnificently. The Martin Luther King Jr. monument stands starkly tall. Then there’s the Washington Monument that you can see from everywhere and the Jefferson Memorial that’s very cool with a cross breeze once you make it up the steps in the beat-down sun heat. 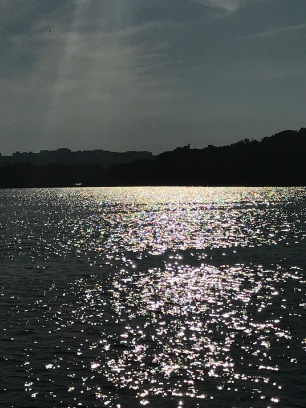 Georgetown had lots of good food and the waterfront is always pretty. I’m on the lookout for information about what tv or film was shooting on at the end of June and beginning of July. Some streets were closed, and crowds gathered. We were told to keep moving and not to “saturate” the sidewalk. The sidewalks remained saturated with throngs of onlookers peeking between parked cars circa late 1970s and early 1980s. My guess is a Back To The Future reboot. I could be very very wrong. 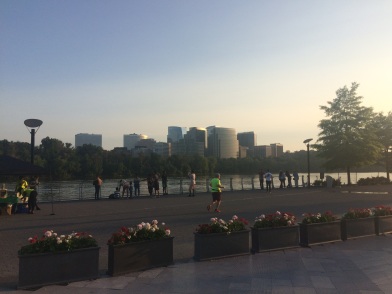 Ford’s Theater has a few free slots for presentations that we happened upon. You don’t get to go into the museum with the free show. That was fine. We saw the presentation which was given by a man dressed in old timey garb, claiming to be the sheriff on duty the night Lincoln was shot. This presentation was vastly different from the one I saw the first time. That time it was given by a park ranger dressed in a park ranger uniform. So now I want to go back a third time to see what else I might get.

Off the beaten path, kind of, we stopped at the National Cathedral. This is the perk of driving around all of DC. You see stuff that’s not on The Mall. It was gorgeous. Fact: An earthquake made pieces of it fall down. Still, it’s standing tall, and it’s got a garden, and the garden has bunnies! 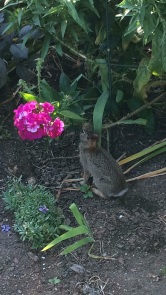 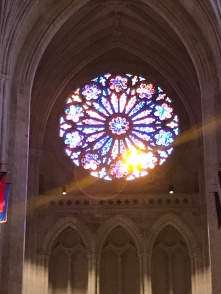 The plan: continue driving across the U S of A, poetry in hand, taking in the sights, drinking tea, doing yoga, listening to Train, getting sticky from cotton candy.