If you’ll recall, last time I checked in here, I was limping around, unable to sit or move really. The positive update is that I can walk. The negative update is that not only do I still have patellar chonromalacia in my left knee, but the exercises the “expert” physical therapist gave me to fix that problem by opening up my tight hips successfully tore open the labrum of my right hip. That’s what the limping has been all about.

Meanwhile, I’m yoga-ing. Well, not really. I’m watching people yoga while I yoga in my brain. Fact: like 5 % of yoga is physical practice. The rest of it is all in your mind. Yeah, I know. Mind-blown, aren’t you?

On a complete sidenote: National Grid has been digging up the streets around my block for the past month and my dead end has been a storage place for their big yellow pipe thingies and various-sized piles of loose asphalt. This week, a port-a-potty appeared. I haven’t seen anyone go in it or come out of it, but it’s not like I’m watching it. I bring this up right now only because there’s a new kind of truck outside, and chains are rattling again. Either they’re moving more yellow pipe thingies in or moving them out. Guaranteed that plastic craphouse will still be standing when the truck leaves.

Anyway, focused meditation and breathing are what yoga is all about. Clearly, my focus is off (see paragraph above). I’m working towards passing this yoga course with every  element of willpower I own. I passed the written test and enjoyed a lovely ayurvedic meal with the yoga women afterwarrds. I would say I helped cook it, but mostly, I ate, and then I did what I do best with homecooked meals–I helped clean up. It’s the Virgo in me. I like it neat. Here, “it” means every gosh darn thing in the entire world. 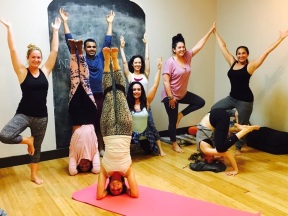 The off-track-kneecap stopped hurting for a while. Then it started acting up again this week. The hip is nowhere near as painful as it was, but the pain is still there, moving from front to side to back to butt to all around and down and up and in again. Mostly, I’m annoyed. I work out six days a week on the usual. Now I’m kind of doing my weights for my arms and abs, and then every other day I do some PT exercises I looked up for both my knee and my hip.

FYI: Nowhere in the knee PT does it say to do any of the hip opening exercises the therapist told me to do. Ditto for the hip PT. That therapist? Is an ass. Did I mention he stretched out my right leg and then told the assistant it was my right knee? Yeah, that happened, which makes me even more convinced that he’s the reason my right hip is falling apart from the inside.

This leaves us here: I have my practicum on Friday at 2 if I can get two people to practice for me. I was planning to show up for the gals who are going before me, but yesterday was an achy setback, so I’m not sure if a physical practice in which I have to, like, move my legs is in the near future. This seems unfair to everyone–take my class but I can’t take yours. If it doesn’t work out for Friday, I’ll just teach the final some time in the future.

For shame, PT Therapist, for shame. Yes, I’m blaming everything on him. And on the ortho doc who sent me to PT for my knee in the first place. He could have just said, Don’t do high impact exercise for a week and see what happens because that seemed to make it better overall when I was stuck on the couch for two and a half days unable to sit upright. This is what we call rage. A very calm yoga-like rage.

What does a gal do when she aches and has plans to move and shake? She ices her joints and refuses to accept that she’s got issues. She is me, and I’m doing fine with my ice packs and willpower. That makes a good band name.

Book Launch After Dark was a year ago at @themuseny @industrymakers and wow it’s been a year! Grateful for the folks who’ve been celebrating along and for the folks who came out in the driving pouring sideways rain last night to share another night of wonder. In this kind of world, a bit of creative magic makes a big difference.
Join me for yoga at Beyond Van Gogh Long Island!
Super psyched to announce I’m teaching a yoga class at @vangoghlongisland date TBA. So thrilled to represent @samudrayogagc in this artistic yoga experience.
Book launch by day at Ground Central was a year ago. Hooray for good times and looking forward to more.
Rachel Zucker writes about all the things I forget we can write about. The Bad Wife Handbook takes #poetry across wide pages and then finds small structured verse to inspire writing and also how to keep living life.
Got that shaky shaky wobbly wobbly thing going for me!
Loading Comments...