After a long night of nothing followed by a morning of nothing, it was time to climb out of the bathtub, open the curtains, and start packing for home. The morning was sunny but chilly. Not that it mattered. My morning was to be spent answering emails and then heading to Shreveport. When I’d landed, I picked up a map of close-by things to see, so I figured I’d see some things before checking in.

Shreveport was pretty deserted on an early weekend morning. I wonder if it’s ever not deserted because it seemed more like a ghost town than a sleepy town. What made it more alive was the public art, which was really what I was there to see. I also became mesmerized by the passing trains. Once again, it was as if I’ve never seen a train before, never been on a train, and don’t have a train so close to my house that I can hear it sometimes pass by. 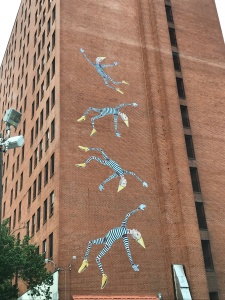 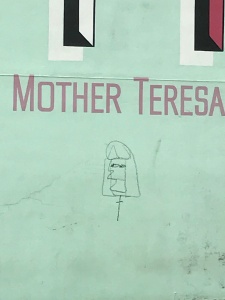 This is art on art.

This is me getting my fingers in the way of the art. 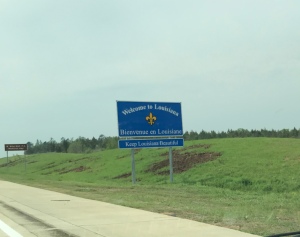 I usually blur out license plates, but that would defeat the purpose here.

The art didn’t take all that long to see, so I headed to the airport. You know how they tell you to get to the airport two hours early? Yeah, that’s helpful if you go to an airport that has more than like 5 gates. Shreveport’s airport has like a one-lane road in and out that is wide open. I practically had a personal TSA agent going through security because I was the only person going through security. There were three gates where I was waiting, but really, it was only one gate. Only one door to the airplane with three different waiting areas for the one door.

Across the waiting area sat a group of men clearly going somewhere for a round of golf that day and most likely heading home later that day by plane. I waited a pretty long time since I was there so early, but that meant more reading time. Then I landed in ATL and read some more while avoiding all the people in the waiting area who thought putting bare feet on seats was an okay thing to do.

There’s a lady at the gate with her bare feet up on a seat because, you know, that’s not gross. #travelwisdom #Traveling #MamaImComingHome

There was a second culprit with only one foot up. Still nasty.

Who DOES that?! Garbage people. That’s who.

Then I flew home on a rather large plane where I realized I’d prefer an aisle seat rather than a window seat next time. You know, like next time I go to Texarkana and there’s no tornado and I actually get to read and talk to people about poetry. Some day, Texarkana, some day.

Many months ago, an email arrived in my inbox from TAMUT. That’s Texas A&M University in Texarkana. In Texas. I clarify that because there’s also a Texarkana, Arkansas. Right across the border. Across that border is a post office, the only building in the U.S. that sits in two states. Already, just getting this email, I was in heaven. Because, you know, this kitsch is my jam.

They have a program called PLACE and its theme was Science and Technology, and the email was from the English department. Everything here describes the essence of my being. They invited me down there to read. I was like, Yes please.

On an early morning in April, I got into a van and got dropped off at JFK.

A lot of airport adventuring occurred. By adventuring, I mean waiting on lines. Bag drop line. Security line where I took off my shoes and then the TSA guy told me I could take them back but they were already in the bin. Also, the guy on the other side of the bin line was telling me how the bins needed to be stacked even though I was the only one stacking them, so I told him that and he said, oh no it’s okay. I think he felt bad because I used my “I’m a little girl” voice that I hate using but I really was the only person stacking them and I didn’t need to be lectured. Then there was the long slow walk to the farthest gate. I ate a bagel and then it was time to board. Boarding line. Line in the plane down the aisle. Sitting in the seat waiting. Waiting for take off.

The flight was great because I read a lot of the very large book I borrowed from the library (The Sleepwalker’s Guide To Dancing by Mira Jacob–read it–it’s uh. may. ZING.). I failed to check the page count when I requested it to be sent from another library, so when I saw that it was almost 500 pages, I wanted to return it to read at a later date but felt bad about the energy used to get it sent to me. Carrying it around isn’t a fun time — it reminds me of that summer I read 1Q84 and took it on the train with me to hang out with S and then wound up carrying it around like — well, what’s that cliché about an albatross? You know that one? It was like that. This time it worked better because even though I had to carry it in my backpack and then after switching into my shoulder bag, a lot of the time I was able to sit with it.

I wound up carrying it around a lot when I got to ATL for my layover. ATL is a long airport. I could have taken its train between terminals, but I opted for walking since I’d be sitting to eat and then sitting on the flight and then sitting in a car. Between the book and a writing book and my folder of fun and my tablet, it was pretty heavy. Once I found the terminal, I circled it a few times, looking for a salad. Found one. Ate it. Walked back to my gate which again was the farthest gate, and sat and read. I like ATL’s airport because of its urgent messages about how not to spread germs. I like your style, ATL. 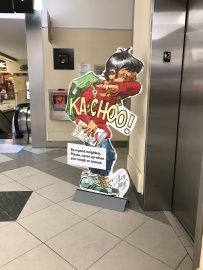 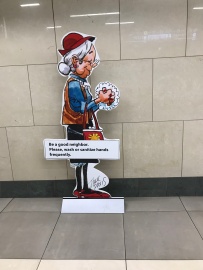 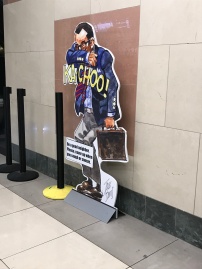 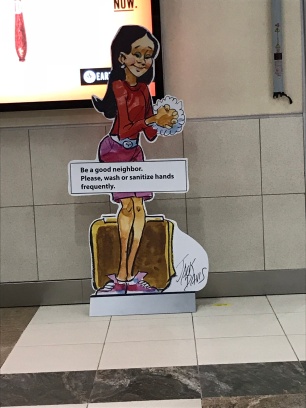 The flight was quick but I don’t know exactly how long because there was a time change where I gained an hour. I found my bag easily and then found the rental car place easily and they barely looked at my license before handing over the keys. I like Shreveport. Very easy. 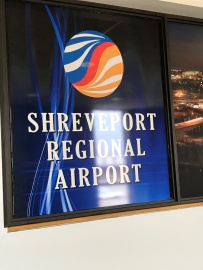 The drive to Texarkana brought about all kinds of feelings. Terror at the 75 MPH speed limit. More terror at the idea of passing trucks at the 75 MPH speed limit. That awwww so cute! feeling upon seeing cows lolling about in the fields on the side of the road. As if I’ve never seen a cow. As if at home I can’t drive an hour and see a cow. Still, I exclaimed Aww Cows Awww! Excitement came about when I passed the Welcome To Arkansas sign followed by melancholy at not being able to take a photo of it. I realized later on that I’d probably see more of them since I’d be on the boarder of the state for the duration of my stay. Then I felt pure bliss as the waves of color blossomed on either side of the road for stretches at a time. Dark red flowers first. Then some white. More red. Then purple. Then yellow. If I knew flower names, I’d tell you what they were, but we’ll all have to settle for color. 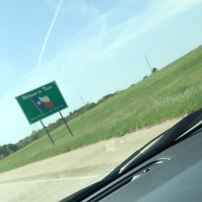 Finally, I pulled into the hotel lot after driving in a very large and confusing circle–which I should have expected since the road it’s on is called Loop. Just as quickly as I checked in, I changed because it was 80+ degrees, and ventured out to do the one thing I wanted to do more than anything.

I headed to the State Line Post Office so I could stand in two states at once. Really, you can do that all along State Line Avenue, but if you don’t want to stand in the middle of traffic, standing at the post office is the way to go. They have signs and everything. One side Texas. One side Arkansas. Also, the post office is the only building in the U. S. to stand across a state border. So I was in heaven. The wind almost blew me away, but still, heaven. 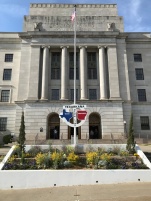 Also heavenly: Mexican food. I pulled into Fuzzy’s Taco Shop and feasted to my heart’s content. My body did not have an adverse reaction, which is surprising since I usually eat along the lines of Whole 30. Soft chicken tacos, black beans, refried beans, and a huge chicken enchilada slathered in enchilada stuff is not exactly Whole 30 approved. What it is is delicious. Heaven keeps expanding, y’all. 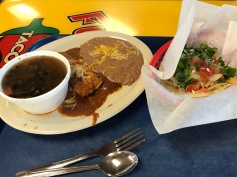 Today is Red Planet Day, a good day to liberate the astronauts once again.
At the beginning of Autumn, an urgency to read @cherylstrayed ‘s Wild struck me suddenly, so I began reading and raving about it, especially to my yoga classes: lessons in letting go, allowing the universe to do what it does, learning how to react to everything out of our control, and discovering who we are at every moment.
Current ailments: lower back, hips, thighs, right wrist, right thumb, left wrist, right foot, left foot (from the Great Mystery Illness of earlier this year when I didn’t realize I was sick until day three simply because I rarely get sick to the Very Unnecessary Surgery of July, this little body has been going through it, quite resiliently)
Words go here. As a poet, I usually have a lot of them, and I’m all for making some up, too. Still, in this moment, none come to mind to describe what I’ve felt this year as the first Poet In Residence for Cedarmere.
Some positive reinforcement for creative folks appears in Your Art Will Save Your Life by Beth Pickens. The advice appears between descriptions of specific political climates and shows how creativity and politics can work together, but if that’s not your bag, that’s okay. The author suggests to take what works for you and leave the rest for someone else, which is the same advice I offer in life in general. Creatives, keep creating.
A belated thanks to Skink Beat Review for giving my #poem a home. Read “Scenes From The Setting” in its entirety on page 7 of the June 2022 issue.
Loading Comments...