Then on a sunny yet rather chilly Saturday, I made my way from Penn to Cooper Square, wandered around looking at the map on my phone and street signs in a rather circular path, and then found 6th Street mostly by accident. There stood The Ukrainian Museum. Inside was Warhol, awaiting our presence.

Once my brother arrived, we headed straight to the second floor where the rather small but really neat exhibit stood. There were some ink and paper drawings, one of which is a collaboration between Warhol and his mom who did calligraphy. There were pieces that copy his soup cans. There was his mom’s prayer book that had a cover make out of a Chivas bottle’s box. The main show were several prints of endangered species that looked pretty psychedelic.

Side Note: We didn’t find this on our own. S’s mom tipped us off. How she knew about this tiny exhibit in this tiny museum is a mystery. I mean, I could ask, but what fun would that be?

On the first floor was an exhibit of Ukrainian garb. Lots of intricately woven shirts stood in several displays. Interspersed throughout were also skirts and table cloths, and we realized that telling the difference between them was difficult unless we read the labels on the displays. Both kinds of textiles have very pretty intricate patterns.

When we were about to leave the museum, the guy at the front desk told us to take the elevator to the basement because there was one more exhibit. Enter Christina Saj’s Re:Create–the best exhibit around. Each painting uses a steel canvas so that you can add your own magnetic pieces. My brother became a bit focused on finding birds to add to each piece. I added some abstracts to several pieces. Then we found these magnetic sticks and collaborated on a piece together. We could have added letters to make words, but then a group of children came in, which cued our departure. 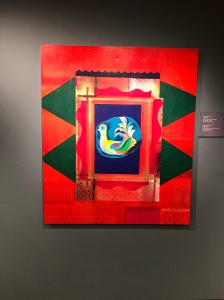 I added the flowery things.

Another bird! The light hits this one perfectly.

We added the straight lines.

Now that we were artists, we stopped by one final small gallery on the first floor and headed out. I was fortunate enough to get an impromptu tour of former music venues that my brother pointed out as we looked for a place to eat. (You, too, can soak in this NYC knowledge by booking a tour with my brother who can’t help but give tours whenever we’re walking around NYC. Greenwich Village, East Village, Brooklyn Bridge, he’s got the skillz: http://newyorkbroadwaytours.com/private-nyc-walking-tours/).

We found a BBQ place that I tried to reserve on OpenTable to get points, but this location didn’t offer points. (BTW: If you’re on OpenTable, make sure you toggle on. There was an app update that made earning points a choice–why else use the app other than to get points? Whatever. Toggle on, people.)

When we went inside, we saw it was an order-at-the-counter place, which is why I couldn’t reserve. What I lost in points, I was made whole by the decadence of sweet potato casserole. We feasted. Thank you, Mighty Quinn’s, you do good BBQ.

After following my brother to get to a subway (he’s a tour guide! he knows how to get to the subway!), we took a train back to Penn where I left him to get home. I found a train waiting for me–this keeps happening, perfect timing!, no jinxing–so I settled in. Then I saw this little guy hanging out on the ride home. 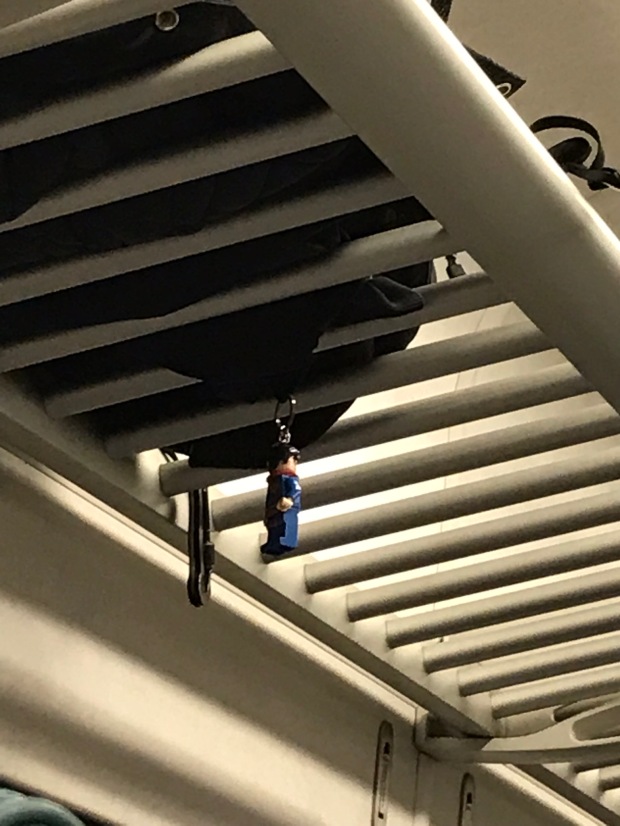