After a long night of nothing followed by a morning of nothing, it was time to climb out of the bathtub, open the curtains, and start packing for home. The morning was sunny but chilly. Not that it mattered. My morning was to be spent answering emails and then heading to Shreveport. When I’d landed, I picked up a map of close-by things to see, so I figured I’d see some things before checking in.

Shreveport was pretty deserted on an early weekend morning. I wonder if it’s ever not deserted because it seemed more like a ghost town than a sleepy town. What made it more alive was the public art, which was really what I was there to see. I also became mesmerized by the passing trains. Once again, it was as if I’ve never seen a train before, never been on a train, and don’t have a train so close to my house that I can hear it sometimes pass by.

This is art on art.

This is me getting my fingers in the way of the art. 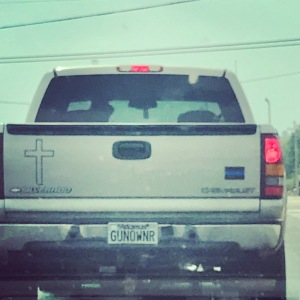 I usually blur out license plates, but that would defeat the purpose here.

The art didn’t take all that long to see, so I headed to the airport. You know how they tell you to get to the airport two hours early? Yeah, that’s helpful if you go to an airport that has more than like 5 gates. Shreveport’s airport has like a one-lane road in and out that is wide open. I practically had a personal TSA agent going through security because I was the only person going through security. There were three gates where I was waiting, but really, it was only one gate. Only one door to the airplane with three different waiting areas for the one door.

Across the waiting area sat a group of men clearly going somewhere for a round of golf that day and most likely heading home later that day by plane. I waited a pretty long time since I was there so early, but that meant more reading time. Then I landed in ATL and read some more while avoiding all the people in the waiting area who thought putting bare feet on seats was an okay thing to do.

There’s a lady at the gate with her bare feet up on a seat because, you know, that’s not gross. #travelwisdom #Traveling #MamaImComingHome

There was a second culprit with only one foot up. Still nasty.

Who DOES that?! Garbage people. That’s who.

Then I flew home on a rather large plane where I realized I’d prefer an aisle seat rather than a window seat next time. You know, like next time I go to Texarkana and there’s no tornado and I actually get to read and talk to people about poetry. Some day, Texarkana, some day.