Juxtaposition! Fun to say and a literary device that comes up in most of my classes. It means putting together seemingly unlike things to show how they go together in some way. Like Reference.com says a good example of juxtaposition is “Romeo’s description of Juliet in Act I, Scene 5: ‘It seems she hangs upon the cheek of night/ Like a rich jewel in an Ethiope’s ear.’.” I have no idea what any of that means, but let’s just say it’s helpful. Okay, I’m realizing that maybe I don’t know what juxtaposition is after all. Now’s a good time to remind everyone that I’m a teacher. Hence, the aforementioned classes. Hence, my current shame in not being able to explain the thing I constantly explain. [I’m tempted to go into a side note about APA citation, but that would turn into a tangent that probably won’t come back around to anything soon. I’ll save that for another time.]

So anyway, if you think of things that don’t seem to go together, you might say Me, Nature, and Anyone Under The Age Of Old. That means my weekend was one of juxtaposition. I spent Friday night and all of Saturday in nature with teens. Yes, I know, I’ll say it again: Me. Outdoors. Young people. I’m branching out, yall! Oh, gawd, branching out. That’s a pun! Paranomasia is the fancy word for punning. I’m a teacher!

If it seems I’m going nowhere fast with this, I concur. I’m still on a high from an incredibly delightful writers’ retreat I was invited to in Fishkill. The writers were in grades 9 – 12. The retreat was on camp grounds. The “what to bring” list included a sleeping bag and a flashlight. Ergo, the list may as well have included biggest fears. In the past few years, I’ve been liking nature more. I know, I’ve ranted about trees, but aside from trees, nature has been nice. I loved staying on the lake in Ohio. Granted, we were in a gorgeous house, but still, a lake is nature. I’ve been walking outside a whole lot. I sat on the ground when I was in yoga teacher training and we had lunch in the park. This is progress.

So I packed up my dad’s military sleeping bag, a flashlight, and a Kerouac book, and I drove up to Fishkill. I found the camp grounds. Shortly after my arrival, one of the chaperones also arrived. I got out of my car. Now that there was more than one person, a bear would have a choice.

The organizer who invited me showed up a bit later as the young writers arrived. They all had comfy blankets, big duffel bags, and smiles. We all made our way to the cabins. The teens were staying in bunks. The chaperones and I were staying a bit up the hill in a different building.

Buildings! Not tents! Buildings! This is my kind of being one with nature. Walls!

This building reminded me of college dorms. I chose a room with one bed because that’s all this gal needs. Roughing! It! And the room I chose had a moth in it that I found when I shifted the curtains. Now, I could have screamed. I could have taken my stuff and chosen a different room. I could have gotten in my car and drove home. Instead, I smushed it. Apologies to all my animal loving friends. Seriously, I’m sorry. It’s just that, well, it doesn’t belong indoors. I’m also more sorry because while I thought I’d killed it, I’d actually just maimed it, and one of the chaperones offered to come on in and finish it off for me, and I said, Sure, which meant omigod yes please god yes.

Then when I went to the bathroom, there was a daddy longlegs scurrying around. So I killed it. I know! I’m so sorry!

Side note: all this has happened since I realized I’m probably a Buddhist. Which I usually can’t spell right on the first try. My life has a lot going on right now, clearly.

Back to the bug murders. There were only two. The next day, a tiny spider crawled into my bag before I could stop it, and I just left it. I also moved a spider off my desk in class today instead of smushing it. Progress. Again, back to the campgrounds–I got a tour of the buildings we’d be using, which were the meal hall and the music building, which was gorgeous. There was a planetarium next door. Heaven! And a pond nearby. More nature to get accustomed to, but since I’d stayed on that lake in Ohio, this was pretty much the same, only with less corn and more geese.

We had dinner and played ice breaking games. We wrote a little. I did my best to memorize names. Being in a room of strangers has never been my most favorite place to be, and so I did take a few moments to warm up and feel out the vibes. All the vibes were positive, for sure, but still, social awkwardness doesn’t simply fade away because you tell it not to come along to the writing workshop. There was the juxtaposition of me, young people, and nature happening all at once, so the awkwardness was going to be a factor. That’s just who I am. And also who I am includes letting it happen and then letting it go, which I did. I sat in awe of the camaraderie of these students and teachers who had spent an entire day at school doing school things and now were bounding around with so much energy and jazz. I felt so tired but their energy lifted me.

Also lifting my spirits was the promise of s’mores that came true right after ice breakers. I mean, this is what being in nature is about–putting sugar on a stick and making a sandwich with chocolate and sweet crackers. 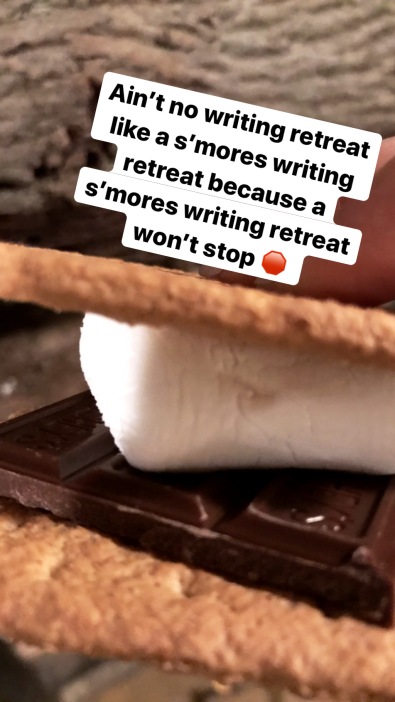 I went to my room after a short stint eating s’mores. Going back to my room proved to be another notch in my braving nature belt. I used my flashlight to find my way back. It was the kind of dark where you can’t see your hand in front of your face. I went the wrong way at first and talked out loud to myself, instructing myself where to go and not to fall. I found my way to the right path and back to the right building. I heard all kinds of critters in the leaves, and there was a huge spider crawling up the side of the door, and I didn’t try to kill any of them. Because they were outside where they belong. But also because I didn’t feel scared of them. They were simply living, the same way I was simply living, and they weren’t trying to kill me, either. This is an example of Buddhism. (No it’s not). 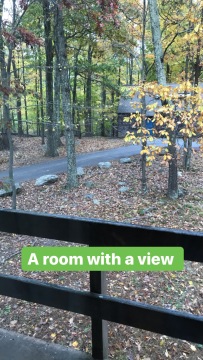 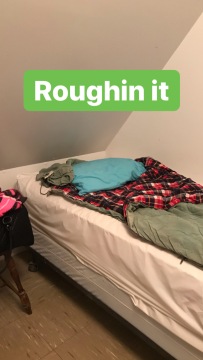 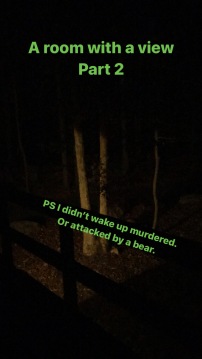 Workshop day arrived! Up at 5 to meditate and yoga and then a walk outside at sunrise to the pond and back. Some of the writers were already up and about, some jogging, some writing, some doing homework. Talk about dedication. These are my people. 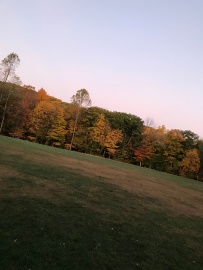 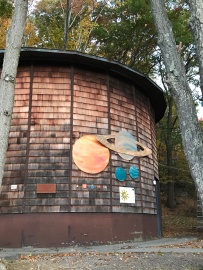 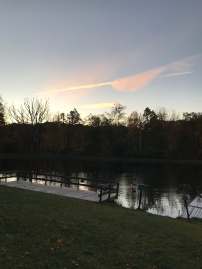 Then lunch time came. I ended the morning recapping that we’d discussed and wrote about physical and geographical spaces and places. After the break, we’d be going places in our minds. Oooh.

Upholding my promise, I started the afternoon with meditation. (Hello, Buddha).  This meditation began with one mat, one body, one room. At its height, it reached out to beyond the galaxies, beyond the universe. Then we all returned home to the mind and heart. I sent them off to write what the journey had told them to write, or to do whatever their sense of self desired. This twenty minutes of doing turned into almost forty by the time everyone reconvened. Oooh, meditation. That’s what it can do.

We spent the rest of the day by the pond. At one point, a scout group came trudging around the water, some scouts with large sticks twice their size in hand. They went into the planetarium while we stayed on the dock, creating and sharing. That’s right, we stayed outside. The entire afternoon in the sun that grew hot enough to warrant a strip down; I began the day in a scarf and a coat and a blanket wrapped around me, and I ended the day with all that tossed to the side. Fireflies and spiders crept about on the wooden picnic tables. Squirrels and chipmunks skittered and scattered. Crickets chirped the entire time.

The day had been one of those blurs, ending in a circle of summing up the experience while the sun went down. Everyone headed to regroup and work on writing while I headed to the hall to write a piece that had been in my queue for almost two weeks. Then there was dinner and then I realized I had to leave if I wanted to stay awake while driving, and if I didn’t leave, I’d have to stay in nature for one more night, which actually didn’t seem so bad after all. But I prefer my own bed so I said my goodbyes, gave some hugs, and left with all the feels. Feels of pride for having been way out of my comfort zone, feels of gratitude for having met wonderful and creative people, feels of inspiration for writing and reading. What good fortune that I got to have such an experience.

Juxtaposition, in apparently my own definition, shows the difference in things while simultaneously showing how they go together in some way. I’ve learned that me and nature have a pretty good connection once I settle in. I mean, I stopped killing things after the first hour. And me and the youth? Yeah, there was some solid common ground there, too. While this retreat was for them, I totally came out of it with fresh wisdom that I couldn’t have gotten any other way and wouldn’t have it otherwise.